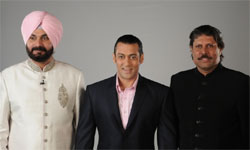 Kapil Dev is one of the best players on a cricket field. But he is horrible when it comes to Bollywood GK! On the sets of Sony TV's 10 Ka Dum, Kapil Paaji just couldn't afford to hide his ignorance about Bollywood, which is just about the only other thing that's as big as cricket in our country.

Says our source, "Kapil and Sidhu were shown a few pictures of young actresses and asked to identify them. Sidhu recognized a few but he was more thrilled when he saw Esha Deol's photograph, because he is a big Hema Malini fan. The dream girl too had reciprocated Sidhu's feelings when she campaigned for him. Moreover, Esha wasn't the only actress he identified, he recognized the 'Malayali girl' Asin too!"

And about Kapil's pitiable performance the source says, "Kapil failed the test. He did not recognize a single face. But he behaved like a true sport as, even after losing he displayed a good sense of humor. Kapil said- I must apologize to all these young ladies. I have not seen any of their films."

The source further adds, "Kapil was quite a sight in his new look- with a sherwani and salt and pepper straightened hair."

suruchi123 11 years ago Dus ka Dum seems to be only celebrity show...