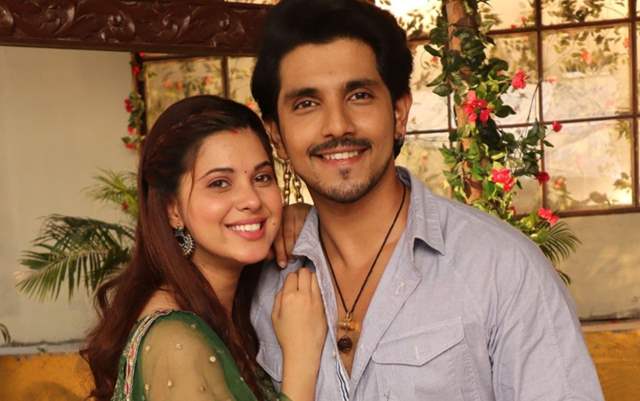 Pandya Store on Star Plus has been creating a lot of buzz and among the most talked about couples from the show are Shiva and Raavi, played by Kanwar Dhillon and Alice Kaushik, respectively. Kanwar spoke to India Forums about a third person's entry to shake things up and what he feels about jealousy in a relationship.

Talking about what he feels regarding the indulgences of a third person in a love story to shake things up and if it is repetitive, he told India Forums, ''As Kanwar, I do feel there is always a third person that enters to shake things up between a couple, and if we think like that, every other story is the same on paper, but it is the way you execute and how it is written and how differently it is written. Everything might seem repetitive in a certain way, so let's see how the audiences react, so far it has been great and the people are loving the current track.''

We also asked him what he thinks about jealousy being an important factor in a relationship. He says, ''Oh, I think jealousy is a very important factor in any relationship and it is there only when there is love, as you get jealous and insecure about the people you love and care of, so Raavi getting jealous and insecure is a good sign for Shiva. You will see how he begins to does so purposely to make her jealous, so yes, it is a good turning point for any relationship, until it is healthy, those feelings are good.''

Well, given the ongoing track of the show right now, we sure do agree with Kanwar and are hoping for changes to follow ahead.

2 months ago Worst written & executed track of PS.Kanwarbhai / Shivabhai Pandya: If anything this third angle forced in ShiVi story is doing- it is shredding Shiva’s character. Glorifying abuses , gaslighting, emotional manipulation all on the name to induce jealousy. Where so called in love Hero stays mute! Meekly agrees to all his abusive mother says & publicly humiliates his love/ wife by giving platform+attention+preference to third angle.Raves you have received post this track start were all mini ShiVi scenes: lal Ishq, ek Dil hai ... else it all is shiva turning Dev1.0. Shiva 1.0, the guy with honest integrity would have never entertained Disu beyond a point. Definitely not on stage. Definitely he would have hold Raavi strongly- not kept looking at Disu.He would have reacted with guilt, with hurt facing Raavi right after kiss. Or next day when he knew she saw. One thing you said correct: Execution: this track is perhaps tried to show Raavi jealous, but by adding comedy music, track doesn’t become comedy. It is coming across as Insensitive, brazen mother promoted adultery. the execution , reactions onscreen all add disconnect with no-nonsense Shiva that was loved. Even the scene where shiva chase away Raavi’s prospective groom looked lackluster as Same shiva is rather quietly perhaps happily sharing stage with other woman- even before divorce. He neither moves away from her, nor jerks her hand away. Nor keeps distance. Execution. Storyline fault. End this disu track- ShiVi’s story has many other unresolved nuances- it doesn’t need 3rd angle and jealousy to show progress in acceptance & love.

2 months ago I wanted this track to be executed properly but unfortunately its very badly written and we feel a strong disconnect mainly because of this new entry! The new entry was totally unnecessary and people are losing their interest in the show! I hope they end this track soon without stretching it further!

+ 4
3 months ago While writing and execution do make a difference, all the PS writers have managed to do is successfully butcher Shiva's character and showing tracks that glorify physical and mental abuse by the other Pandyas, both towards Shiva and Raavi. Hoping for our old Shiva to be back, and better tracks in PS soon

+ 2
3 months ago make the women you love jealous...Good...enjoy her misery...even better....watch her being insulted by mother, making her feel worthless and low and still remains quite because it is none of ur business...wonderful ..its all part of healthy love after all....how stupid can the writers be..i am trying to understand them..🤔

3 months ago I am not liking it and yeah about writing the current track is worst track of Pandya store. We all love KDICE and SHIVI and that's why tolerating all the nonsense but don't know how long people will able to hold off. I wish you both get better projects and yeah better written projects.

3 months ago Dear Mr Dhillon, A bit of what I see as constructive criticism here. You said jealousy in a relationship is ok so long as it's healthy. Right now, there's not much healthy about Shivi's relationship. There were more than enough ways for the Shivi conflict to be ended without introducing a third angle. I would've preferred the NDE route over this. Or they could've gotten too tired to fight and had an actual conversation. Healthy jealousy? Raavi is now living in the house of her husband who publicly humiliated her, implied that she was characterless, refused to apologise for it, and is now in the talks for a second marriage before his divorce is finalised. Do you see anything healthy here? Because I don't. Lots of fans, online and TRP audience both, don't. We know that Shiva likes Raavi romantically. Wants to live with her. And we still can't digest some things like the non-reaction to Disha's kiss. Raavi doesn't know this. How do you expect her to be ok with this? No self respecting woman would, and that's cold hard fact... I hope the third angle turns miraculously positive before even more people decide to leave this show, or that her track ends and Shivi work their issues out slowly. PS I like your acting, just have an issue with content.

3 months ago I like all the actors in the show and KD and Alice are my favourite but why all the actors on the show r in delusion ?People aren't liking the track and that is a fact. Earlier Online fans weren't taken seriouslysaying they don't bring TRP but this week TRP Audience too have shown displeasure for the track. Also no offence but PS has a record of worst execution of amazing tracks. Earlier whenever they have took a good track they execute it horribly and ending toh is simply soo illogical and stupid. 3rd angle is coming out nasty seeing a girl kissing and huging a married guy and the mother is encouraging her son for EMA and spineless ML. Idk why can't they follow the original bcoz dialgous of Suman are so disgusting. Raavi has no self respect, I mean the way she just keeps getting insulted, treated like free ki maid but this women just don't know how to stand up for herself it makes me soo uncomfortable to watch her. Shiva the strongest lead is simply a spineless guy and the way he treats Raavi is soo insulting. Dhara's character who trusted her 1 day husband but can't do the same with 10 yrs wale. The show simply makes no sense and instead of entertaining it gives headache as is full of regressive things.

+ 5
3 months ago This is the worst track ever in PS, worse than Danda kaand. This relationship between Shiva and Raavi is already unhealthy. What is so unique about putting a girl through jealousy, insecurity, abuse and misery. I prefer them to go their separate ways. It’s sad to see that they have made Shiva spineless who stays mum when his mother abuses Raavi and Raavi has no self respect still continues to stay in the same house while she is being mentally tortured/abused. I want to know which audience is liking this track? TRPs are down and online fans are slowly leaving the show, Execution is so bad that most of the days feel like puking at the episode. PS cast and crew are in their own Lalaland, needs to be shown reality.