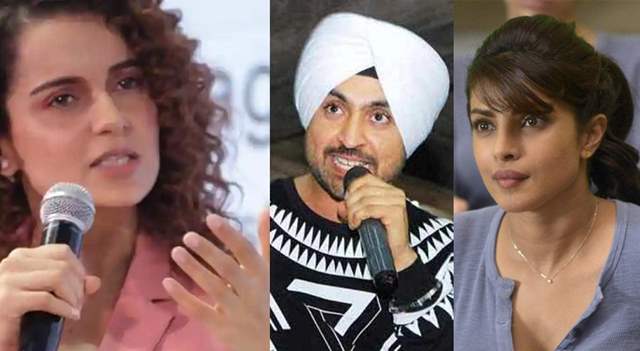 Notably, Diljit and Priyanka extended support to the farmers protesting against the new farm bills.

In a series of tweets, Kangana wrote, “Problem is not just them but each and every individual who supports them and opposes #FarmersBill_2020 they are all aware how important this bill is for farmers still they provoke innocent farmers to incite violence, hatred and Bharat Band for their petty gains.”

Kangana also claimed that Diljit and Priyanka were ‘misleading and encouraging’ farmers’ protests, but would be ‘hailed by the left media’ and given awards.

In multiple tweets, she wrote, “People like @diljitdosanjh and @priyankachopra will be hailed by the left media for misleading and encouraging farmers protests, pro Islamists and anti India film industry and brands will flood them with offers and English/living in colonial hangover media houses will felicitate them with awards, the problem is whole system is designed to make anti nationals flourish and grow and we are too less in numbers against a corrupt system, but I am sure magic will happen in every fight of GOOD versus EVIL, evil has been much stronger, JAI SHRI RAM.”

Earlier, Kangana was involved in a war of words with Diljit Dosanjh. It started with him referring to a tweet posted by her on November 27, in which she wrongly identified an old woman at the ongoing farmers’ protest as Bilkis Bano, the face of the Shaheen Bagh protest.

After claiming that Bilkis was ‘available (for hire) in 100 rupees’, Kangana deleted the erroneous tweet. However, Diljit said that one should not spread misinformation and that she ‘keeps on saying anything’. This soon snowballed into a massive Twitter spat.