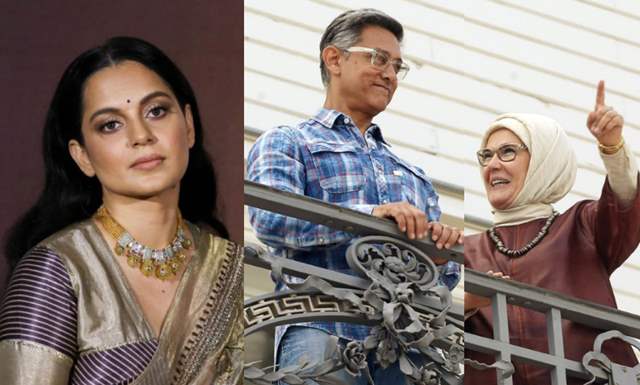 Kangana Ranaut has often raised social awareness with her opinions and she has often been outspoken about her views. The actress has locked horns with many celebrities so far and it seems she plans on continuing the same. Now, she has questioned Aamir Khan’s travel plans to Turkey and participate in a photo-op with the Turkish first lady.

For the uninitiated, Aamir is currently filming his upcoming film Laal Singh Chaddha in Turkey. Last week, he met with Emine Erdogan.

During a recent interview with Pinkvilla, Kangana spoke about her bond with Aamir Khan. She also spoke about her admiration for him as a friend and how she does not plan on ignoring something that bothers her about him.

She said, “I have stopped responding according to my personal equations with people. As a human being, I have a responsibility towards my nation and its citizens. Just because he is my friend, and I have huge admiration for him, does not mean I will ignore something that bothers me about him.”

Kangana called out Aamir Khan for his recent meet with the Turkish first lady and quipped, “Aamir has been complaining about intolerance in India, and yet he goes to Turkey, which is right now one of the most intolerant countries in the world. It sets a kind of example where he comes across as someone who has double standards. I, as a fan and as a well-wisher, want him to come clean on this matter.”

Meanwhile, Kangana Ranaut has finally joined Twitter and she will be holding on the reins of her social presence henceforth. Uploading the first video through the updated Twitter handle, Kangana reasoned her motivation to join the Twitter family.

ChickenSoup 2 months ago Turkey one of the most intolerant countries?? Seriously where does she get all these false facts? Turkey is far more progressive than a third world nation like India. If she wants to complain about intolerance then she should look at her own country India which is undoubtedly one of the most intolerant countries in the world. At least in Turkey people don’t get lynched for eating beef. So it’s she who has double standards not Aamir Khan.