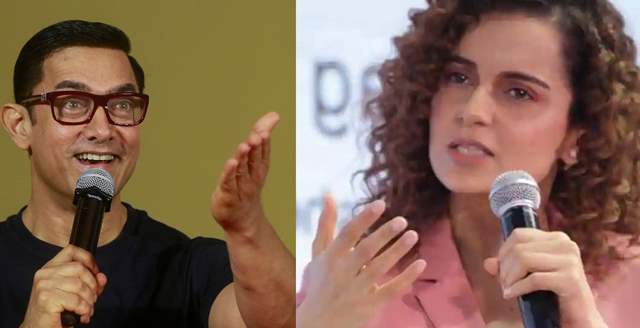 Kangana Ranaut is quite vocal about her opinions and her team calls out hypocrisy of many.

And now team has replied to an interview of Aamir Khan where he spoke about how his children will follow only islam even if his wife was a Hindu. Calling him one of the most tolerant people, Kangana's team has raised a question on why Aamir Khan wants his children to only follow Islam in a country where Hindu culture is so vast and prominent.

ChickenSoup 2 months ago This woman belongs in a mental hospital. She needs serious professional help!

Tippy-top 2 months ago So all the political analysts on youtube are suffering from Bi polar to support her?????? It's like dirty politics is being played with her and she is retaliating.

F.R.I.E.N.DS 2 months ago She has lost it completely

cheeno 2 months ago I have been saying over a period of time that she suffers from Bipolar disorder Schizophrenia...she will end up in mental institution sooner or later..

Needblessings 2 months ago Omg!! Dear lord she needs help. Poor lady completely lost it. her nepotism theory about SSR death proved wrong, she tried her best to milk it as much as possible. Now this toxic lady targeting every celeb just for gaining some followers and to stay in news. she is so disgusting. She is so vile.

NoFace 2 months ago Unnecessary hate😒 what can you expect from her🤬 my father is a hindu and my mom is a Muslim and we follow Hinduism because that’s our father’s faith! We take our father’s last name not out mothers!

malikakas 2 months ago She is right. Why the unfairness and patriarchy? Educate the kids in both traditions and allow them to choose. Anything less than that then don’t whine that people don’t trust your vision of secularity.