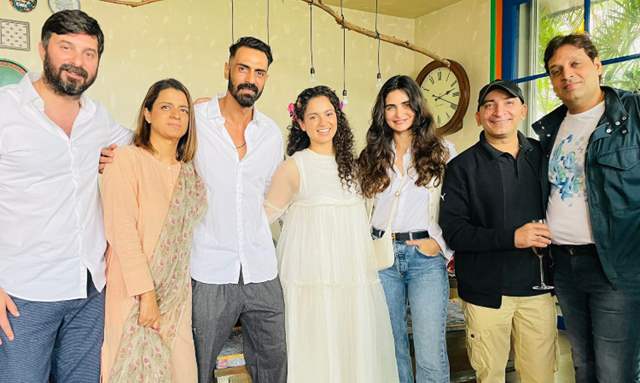 For many 2021 started off with a bang, and the same goes for actress Kangana Ranaut who celebrated her New Year’s day with Arjun Rampal, Gabriella Demetriades, and team ‘Dhaakad’. The Queen actress decorated her house and hosted a party for the team of her upcoming film. She will be reportedly seen sharing screen space with Rampal who was also seen attending the New Year bash with his family.

Kangana took to her Twitter handle and share pictures from the celebration as she wrote: “Cheers to our Dhaakad team and our Chief.... our director Razy Ghai he is India’s top advert film maker, it’s his first film but so privileged to work with him, he is amazing.”

Being an avid social media user, she often treats her fans with a sneak into her professional and personal life as well. Interestingly, just before the new year was about to conclude, Kangana had her 2021 planned. She planned to visit Kedarnath to catch a glimpse of eight Jyotirlingas and said that she wants to visit Puri Jagannath too.