Kanchi Kaul who was last seen in Maayka, as reported earlier by Telly Buzz was all set for her anchoring debut with Sony and Optimystix' third season of Comedy Circus, titled Teen Ka Tadka, but there seems to be a change now. 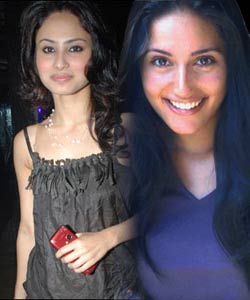 Featured Video
According to our source, "Things did not materialize with Kanchi Kaul, and the production house and channel have found a new host in Mouni Roy. Mouni will now be hosting Teen Ka Tadka, which begins in November on Sony Entertainment Television".

We called Mouni Roy for a confirmation who said, "I cannot talk on this right now". When we asked her whether she has been approached to host the show, she refused to comment.

However, Kanchi seemed unaware of the change, and said, "We are still in talks. Nothing is finalized as of now".

We tried calling Vipul Shah of Optimystix, and even sent him a text message, but did not get any revert.

13 years ago Mouni Roy is the perfect choice .. we love mouni.

+ 4
13 years ago I AM happy that kanchi is replaced
kanchi is not even an average actor ,so forget abt anchoring a show

great that mouni is roped in

yeah !!!! i also agree that there is sumthing wrong with kanchi ,every time she is sacked ,kanchi girl ,u seem to hv loads of attitude as if u r some big star !!!!

13 years ago there are old articles all over the internet..." Kanchi Kaul sacked"..lmao....im sure more articles like that would add up...

Btw i like Mouni...i'm sure she would do a good job!

+ 2
13 years ago when is this going to start exactly from? can't wait to see Jenny there...

eclairs 13 years ago HATtrick
Kanchi kaul is out of a show for the 3rd time it is so phunny
mouni will be a good host she has a style, charm everything which a good host should have
Best of luck mouni

13 years ago me sooooooo happy mouni will do a good job,i luv her dancing but it will be good to see how she host this show and what can i say abt KK i will pray to god that she always gets shocks like this each and every day and remain jobless for her whole life
BTW who is this kanchi