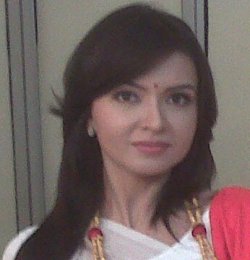 Tellybuzz was the first to let you know about Parul Chaudhary aka Kamya of Star Plus' Tere Mere Sapne making a re-entry on the show, which got delayed due to some personal tribulations that the actress was facing.

But her fans will be happy to know that her evil self will make an appearance back on the show within the next couple of days; this time around with a new-fangled look, different motive and no vengeance.

A source from the sets informs, "Kamya will co-incidentally bump into Sarju (Yash Pandit) at his village. She will come into view as a very simple lady who has left all her bad deeds. Initially no one will notice Kamya due to a vast change in her character, but later as the story proceeds she will come into the lime light."

"She will be in a totally different look and will be seen playing a positive character. She will make a visit to the village to get rid of all her sins, leaving her past deeds behind," explains the source.

We contacted Parul who confirmed her presence and said, "I am very exciting that I am making an entry back into the show with a new look and am looking forward to my track."

With Kamya bringing a big twist in this tale, the viewers definitely have something exciting to look forward to…

shivani003 9 years ago Please just END this show! Who watches it anyway?

Budtameez 9 years ago I love seeing ever so sexy Parul on TV but unfortunately Tere Mere Sapne has gone on well past it's sell by date.
Tere Mere Sapne should close down!
I hope that Parul Chaudhary would get a lead role in a new show soon.

punjabi_qt26 11 years ago Thanks For Sharing. I hope Kaminey does well. I don't think Shahid and the whole team of Kaminey need to be worried about a A certificate or a U/A certificate. People who are going to watch it are probably going to watch it. Not many people pay attention to Ratings these days.

fire_woman 11 years ago So is the title of the movie objectionable? Just exactly what does Kaminey mean? And is an "A" rating similar to a "R" rating in the US?? Is that why Shahid & CO are upset? =/

Urmila Matondkar Does Not Regret, But Ready to Apologise for ...
49 minutes ago