Kamya Punjabi aka Sindoora Singh is back in Zee's Banoo Main Teri Dulhann to frighten the life out of the viewers with her new scary look!! 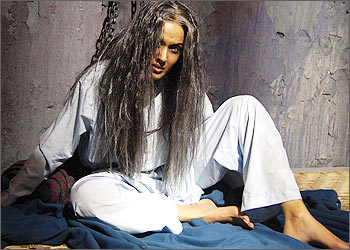 Featured Video
However, the actress who was recently shooting at Mukesh Mills, Colaba, Mumbai experienced few spine-chilling incidents that have made her vow that she will never ever shoot at the forbidden place anymore!!

Says Kamya, "I had heard enough stories, that nobody has ever shot peacefully at Mukesh Mills and have experienced some mishap or the other there. But being a very religious person, I always know that God is there with me and nothing can harm me. But when I started shooting at Mukesh Mills, I lost my wallet which had my debit card, credit card, pan card, and some important documents of my car. The very next day, my new car had a breakdown and I just could not believe it. This could have been a coincidence too, and I did not know whether I had to blame the place for this".

"But yesterday's incident has really shaken me. A girl who acts as one of the inmates in the mental asylum behaved like possessed. She suddenly had a manly voice, her face literally changed and those who were gathered there were taken aback. When I got to know of this, I wanted to see the girl; but stopped myself from going there. My Director who went and saw the girl told me that the girl in a manly voice was screaming, 'Yahan se chale jaao, yeh hamari jagah hai, maine mana kiya tha naa mat aana, chale jaoo'".

After this incident, the entire unit quickly wrapped up the shoot. There was one scene wherein the wild Sindoora had to run on the streets at night. But Kamya simply refused to do this scene. "I did not want to do that scene there, and I am thankful that my team co-operated with me and packed off from the place. I will never go back to that place again", quips the petrified actress.

Well, we just hope that the production houses and channels make a note of this particular fact when it comes to Mukesh Mills!!

+ 9
13 years ago That''s scary. Good noone got hurt while shooting there!!

+ 2
13 years ago OMG that really is creepy!
i would never go there! lol

13 years ago omg thats so scary!!!!
the stolen things cud be coincident but the possessed part was scary!
lol =D

13 years ago That is really creepy. Just reading about it makes me scared to death. I am glad they have packed up that from that place because when I saw it on TV in the news the place looked terrifying.

pic is freaky too!