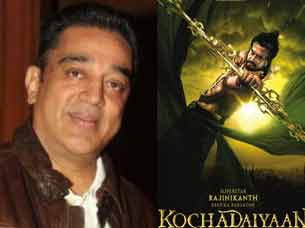 Actor-filmmaker Kamal Haasan was personally received by debutant director Soundarya Rajinikanth Ashwin when he was invited for a private screening of her father and superstar Rajinikanth-starrer "Kochadaiyaan".

The screening was held here Sunday.

Kamal, who was busy shooting for Tamil film "Uttama Villain", took out time to watch "Kochadaiyaan" following a personal invitation from Rajinikanth's daughter.

Haasan was accompanied by his "Vishwaroopam" co-star Pooja Kumar for the screening.

According to a source at the screening, Kamal thoroughly enjoyed the film and appreciated Soundarya for the effort.

"Kamal really enjoyed the film. He personally congratulated Soundarya for daring to experiment in her debut film," the source told IANS.

"Kochadaiyaan", which released Friday, opened to mixed reviews from audiences and critics alike.