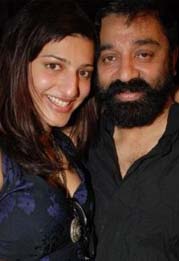 Featured Video
Shruti Haasan sure has an ear for music. The newbie to Bollywood is currently composing music for her dad's film 'Unnaipol Oruvan', the Tamil remake of 'A Wednesday'. Moreover, this young lady convinced her immensely talented father to sing two songs for her!


According to our sources, Shruti wanted something different in the songs. Having a cult status down south, Kamal Haasan's voice is one that people identify with immediately


Shruti had a clear idea of what she wanted and she experimented with her father's voice in a way that's never been tried before. She has made her father sing not just one but two songs for the film, each of them belonging to a different genre. One is a mellow soft Sufi based song and the other is a commercial song with elements of hard rock in it. Moreover Shruti's younger sister Akshara has choreographed for the same movie.


Well, the outcome of this role reversal sure looks spectacular and the father-daughter duo seem all ready to rock.