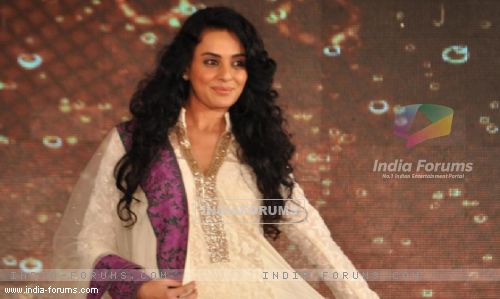 Total Siyyapa fame Saraa Khan who will be seen on Epic Channel's new show Kahi-Suni, in this candid chat with TellyBuzz, speaks about her experience shooting for the show, experimenting her hand on hosting, learning about the Indian religious myths and much more. Read on!
Much waited show Kahi-Suni is finally all set to go on air. What is your take?

Yes, the show is finally going on air from tonight after a very long time. I am really looking forward to it. This show has been the most challenging one in comparison to other works that I have done. It is challenging because it took a lot of time and needed a lot of detailing in terms of all the facts and myths.
We have seen Saraa Khan always as an actor. How was it trying a completely new genre like hosting?

Hosting is difficult. It is very very difficult indeed. You need to face the camera and speak one entire paragraph about the religious myths in Hindi. That was one task. You just could not manage to fumble or get nervous in front of the lens. On the contrary, I feel acting is very easy. There are a lot of retakes and also if the dialogues are big, you can take a retake and continue from wherever you feel like. Acting is much simpler that ways.
What basically is the entire concept of Kahi-Suni?

Kahi-Suni is basically about bringing out all the myths. Like, in the first episode, audience will get to see about Nasik and a myth related to that city. It is a known fact that Raavan's sister Surplakha's nose was cut in Nasik. So we have brought out such myths related to that particular city. We have also asked and questioned about the same to the experts as well.
Now that you have roamed in most parts of India, which place would you like to visit again?

I would love to visit Rajasthan once again. The entire state is just so colorful. Everyone there wears a pagadi and all of them are so rooted to their cultures. All of them greet and treat people so well. The essence of traditional and our culture can be sensed very strongly. But if we talk about place wise, I would love to visit Himachal Pradesh.
One incident from the shoot that you will never forget?

Okay! So there is this incident that had happened with me while we were shooting for the show. It was a 10 hr long road trip and since all of us were hungry, we stopped at a dhaba and ordered for some Palak Pakodas. After eating them, I fell so ill that I was admitted to the hospital and six bottles of glucose had to be injected. We had so tight scheduled then; we just had one and a half day in each city. Our whole schedule went up and down and so haywire. The other funny incident that happened was in Shimla. We were shooting at a temple named Shaku Mandir which is known for monkeys. The monkeys there were so notorious, creepy, mad that you cannot even hold a scarf or a phone in your hand. If they see it, is gone then. They will just take it away; so you have to keep them packed inside. So, while we were shooting, I had draped a scarf around me and one of the monkeys saw it and it just started pulling from behind. I was so reluctant to give it away but that monkey was just giving up. Eventually, I gave up. Later, everyone from the production house gave him so many things and started bribing him so that he would give the scarf back since it was a continuous shot. That was one mad experience.
Since your show is airing on a new channel, what are you expecting from your audience?

Very honestly, I do not want to expect anything from the audience as of now. I just want people to see it and tonight. I will get the response and feed back automatically. I am looking forward for the show going on air.
Well, this is one of its kind show and surely something that viewers will long to watch.
TellyBuzz wishes Saraa Khan all the good luck for her future endeavors.
Upasana Patel

+ 3
6 years ago The myth and the fact could be explored a bit more. But nonetheless it was an interesting watch!

+ 4
9 years ago Wishing you a very happy birthday and many more to come.may Allah giv u good health n prosperity!

+ 3
9 years ago I would love to see a film with one scene with Dilip Kumar, Amitabh Bachchan and Shah Rukh Khan - perhaps even Amir Khan as well. THAT would be WONDERFUL - perhaps we can be that lucky...

+ 2
9 years ago happy birthday to the king of acting DILIP KUMMAR old is always gold -i am fond of ur acting since my child hood.

9 years ago The true actor par excellence. He was so versatile and perfect. Wish him happy birthday and wish him many more to come !!!!!!!!

+ 6
9 years ago DilipKumar , Raj Kapoor , Dev Anand formed the three pillars of Hindi Film industry when it was not Known as Bollywood . Happy Birthday to the only living icon.

+ 3
9 years ago HaPpY B'daY Dilip Sahib! My mom used to watch all your films she said they were great and unforgettable also she said old is gold'