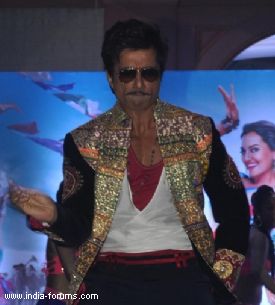 Actor Sonu Sood has danced to choreographer and director Prabhudheva's tunes in the song "Kaddu Katega" from the movie "R... Rajkumar" and compares it to item number "Munni badnaam" from "Dabangg".

"A bad dancer like me can look a little better when you have Prabhu sir on the set. When he heard the song, he said it rocks and you will dance," said the 40-year-old and added that he did just five percent of what Prabhudheva taught him and "still it looked very good".

"I need to do at least 15-20 films with him before I can actually start dancing... 'Kaddu Katega' will be my 'Munni badnam' in the film," Sonu told reporters Wednesday at the music launch of the film.

It will hit theatres Dec 6.