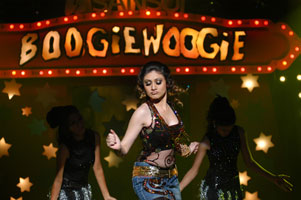 Mumbai May 16, 2007 : will rock the stage on the Kid's special on Boogie Woogie on May 18, 2007. She will add sparks to the renewed Sansui Boogie Woogie by performing some hot numbers in her style and will also act as a guest judge on the show.

Watch out for this special episode on May 18, 2007 at 8 pm to catch all the fun and excitement. This episode will also feature nine young participants out of which the three best performers will be selected to move on to the next round. The nine participants thus selected are nine-year-old Akash Das from Orissa, Chandan Maheshwari from Faridabad, Papiya Sarkar from West Bengal, Priyanka Mahajan, Kasturika Sarangi, Sayali Samant, Jaya Sharma, Priyanka Keni and Aishwarya Kale, who will feature in the fourth round with a partner of their choice. A sibling, parent or even a teacher is allowed to join in. D- day will see the four finalists trying to out do each other to win the prize money. The winner takes home Rs 5 lakh.

+ 2
15 years ago she is just awesome.can't wait to catch her in action.thanks for the info.