Juhi Parmar and Sachin Shroff, one of the couples taking part in NDTV Imagine's Pati Patni aur Woh are pretty livid at the recent newspaper reports that have spoken about Juhi not being the 'Pati Vrata Bahu' that she had been portraying for years on screen as Kumkum. 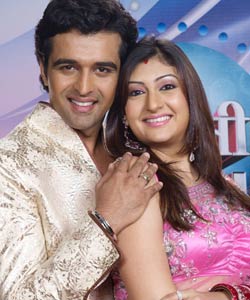 Featured Video
Juhi feels that her fans have been reacting badly to her negative image being shown in the show. "I want to clarify to my fans that I am the same Juhi who they have been idolizing for years now. I have always been transparent and blunt; a person who will not mince words and will say what comes to mind, even if it is before the camera. But Pati Patni aur Woh has been edited out in such a way that the entire situation is not brought in front of the viewers. We were before the camera for 24 hours in a day, and what you get to see is just 2-3 minutes of Juhi expressing her anger on something. But what triggered this, and what happened before is not shown at all", she states.

It was also reported in papers that an angry and grumpy Juhi made Sachin wear the empathy belly, courtesy her tiny back ache. But Juhi retorts to this news and says, "I had suffered a tail bone injury in my back, and have been living with a troubled back for nine years now. And this empathy belly weighs more than 15 kg, from the outside which was really dangerous for my back. When a woman is really pregnant, the belly is from within and your body is able to withstand the extra weight. But here the case was different. While Apoorva was allowed to put the empathy belly on, they argued that I should be putting on my belly in spite of me telling them about my back problem. That is why I asked Sachin to put it on".

"All they have shown is that Juhi gets up very late in the morning, but what is the reason for this? It is because she was taking care of Rudransh staying awake till 5 am in the morning. They did show a scene of Sachin sweeping the corridor outside, but they did not show for once Juhi cleaning at home, cooking at home etc", adds Juhi.

Juhi tells her fans that she loves them a lot, and they need to understand that this is a reality show which is simulated. "I am not finding fault with the makers of the show, as they cannot show all that happens in the house. Having said this, all would have been fine if they had shown both the faces of the coin. In fact, unlike all other wives who fed their husbands with old food, I made it a point to cook daily for Sachin. I would never allow him to do any chores at home. But this was also shown as a negative point. I used to ask Sachin to take care of Rudransh so that I could steal time that way and cook for him, and do other chores at home. But this was not brought into light", she retaliates.

Juhi goes on. "There was this incident where I argue that I will not take my kid for maalish. This was shown, but the fact was that I refused to take him because Rudransh's mother had clearly instructed that he should not be given maalish during summers. They showed me arguing for this, but again I started arguing when they did not agree when I tried to convince them politely", states Juhi.

Juhi is also upset about the fact that the show depicts her as a dominating wife. In her defense she states, "I have never asked Sachin to help me in any work at home. In fact, we had a fight for this reason, where he asked me to allow him to share the work. Unlike others who just managed the kid, I wanted to manage my kid as well as my husband. As I have been portrayed, I am not a dominating wife.. If I was, why would Sachin be so much in love with me? Why would we be together and still in love, tell me? I have always been the person who would fight for my rights, and I did exactly that in the show too. I was also possessive about my kid, and was crying for hours after he left us. But what was portrayed was that I never had any feeling for Rudransh. At the end of it, not even once did Rudransh's parents complain about how we took care of him. They came to our house just once, to tell us where his night suit is kept. I am proud of the way in which I have been brought up by my parents; I had to fight my own battle in the show because Sachin is a person who always speaks less and does not get into arguments".

Last but not the least, she tells her fans that the only criteria for being termed as a good bahu is not by getting up early in the morning. "I have always said in my interviews that I am usually a late starter and need the morning tea to start my day. This is what happened here too, but do you judge a person by only this? What about the errands and work that she does all thro' the day?", questions Juhi.

Giving a preview of what is to be shown in the show, Juhi tells her fans, "This is just the beginning, there will be many things shown from now on where you will see Juhi very angry. But let me tell you, there were many impossible tasks given to us and I just showed my displeasure. I have always aimed to be a good wife and mother in the show".

We also talked to her hubby Sachin Shroff who categorically stated that, "Juhi never allowed me to do anything at home. She always managed stuff, and this is why I mentioned in one of the episodes that she has to entrust me with some job or the other. She is a perfectionist, and the angry reactions that came out of her were simulated, and the situations demanded that. Having said this, it was my mistake not to have openly told all that I will wear the empathy belly instead of her. Juhi has a severe back problem and I should have accepted this task myself before she asked me to do it. About Juhi being the dominating wife, it is certainly not that way. By saying all this, we are not speaking against the makers of the show. We are only trying to clear it out to our fans that the show showed only one side of the picture to them".

SuperSara 12 years ago You are truly awesome, the directors of this show should take responsibility for protecting their stars from libel.

+ 5
12 years ago Bless yaar, this show is seriously stessing them out! We still love u guys!

yamini_lovs_ksg 12 years ago I know the show shows only that parts that wud increase TRP,this somtimes spoil the image of our beloved celebs
but JUHI shud take no tension all her fans still love her the very same way n talking about SACHIN,he is one of the sweetest n most caring husbands I have seen

12 years ago i lv these two! these shws dnt shw everythng tht happens, so its their fault and nt juhi and sachins!

12 years ago Hey juhi, we all love u yaar... why are u givivngus clearifacations... we trust u darling... Go on... channel only shows masala and chatpata stuff... WE STILL LOVE U !!!

+ 2
12 years ago Juhi dont worry.
ur fans know all about U & they dont beleive the crap being shown

12 years ago why so upset when someone is pointing out the truth?