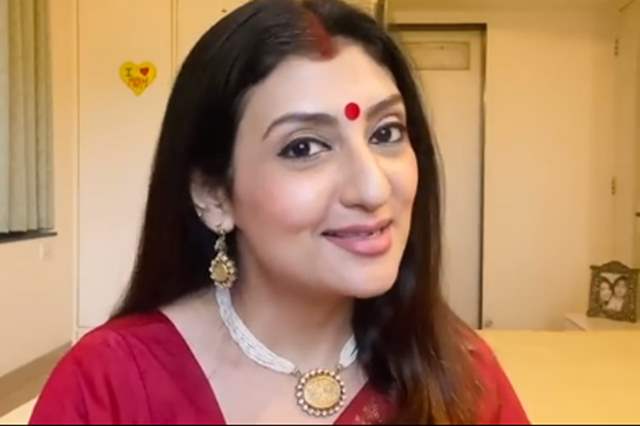 It may have been over umpteen years since actor Juhi Parmar played the role of Kumkum but indeed she is best remembered for that. Fortunately, the actor has also been one of those who has managed to break that image too and had another successful run on the small screen only a few years ago with the show, Shani.

Now, having enjoyed quite a good run, the actor is once again, back with another TV show and this time she will be seen in a different avatar in Hamariwali Good News.

When asked about what led her to be a part of the show, in an interview with Bombay Times, Parmar said, “I loved the script, but a part of me was and is still apprehensive about being on the sets and going back home. However, I think as a society, globally, we have come to realise that the virus is not going anywhere and we need to get back to work, but with precautions. Samairra misses having her mumma around at home, but she’s also excited to see me back on screen and, in fact, is already planning a premiere night at home, a mini party with her grandparents for me.”

Opening up on her telly journey, she said, “The greatest gift in my career has been my show 'Kumkum- Ek Pyara Sa Bandhan' and I just hope that my new character Renuka becomes the cherry on top! I’ve been reading many scripts over the years after 'Kumkum', but when this show came to me, I instantly had a smile on my face. The story line is unique. Renuka is a strong-headed, God-fearing, fun-loving homemaker, who goes to the extent of having a child for her daughter-in-law — a thought that is noble and yet, so challenging. Being a mother in real life, I know that even the thought of my child being with someone else, makes my heart skip a beat.”

Juhi Parmar shares a hilarious incident about a 'Mistaken Identity' on ...

beguiling 1 months ago All the best to Juhi! Hope this show does well for her!