Juhi Parmar and her Badi-Saas from Kumkum Pyaara Sa Bandhan, Rita Bhaduri had a gala time in Sahara One’s Saas V/s Bahu. Though the bahus of the first week Barkha Bisht, Aanchal Dwivedi and Juhi Parmar won the battle hands-down and qualified for the quarter finals, they will surely miss their Saasus on the show. 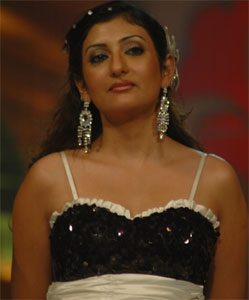 Featured Video
“The concept of the show is what I was impressed with. I am enjoying this show a lot and we now need to work harder for the quarterfinals”, quips a delighted Juhi. The talented actress was amazing all thro’ the week, especially in the duet round with her on-screen life partner cum celebrity guest on the show, Hussein Kuwajerwala, where they sizzled on the very sensuous number from Fanaa, ‘Tere Haath Mein’. But the performance raked a mixed reaction from judges. While Longi loved the lifts in the ‘Rumba’ style, Aruna Irani thought that Juhi’s costume did not go well with the lifts used in the choreography. “The slow number would have been boring on stage without the lifts. And in a competition like this, the steps would have looked weaker”, quips Juhi. Talking of her attire, the actress states, “We had a cute story all thro’ the song and according to me, only a gown matched well with the story and the choreography we went for. Every individual has a different perception and Arunaji had her own. I will certainly take it as a learning curve and will be careful with my attire the next time when I go for a song with lifts”.

Juhi Parmar is caught between two men in Kumkum Pyaara Sa Bandhan wherein Faizal Raza Khan makes his entry as a Jhat who wants to get Kumkum in his life. “I am really getting frustrated now, with Sumeet and Surjan behind me” quips Juhi as she laughs. The actress is enjoying every bit of this comic phase in the story and thanks the audience for accepting them so well after the reincarnation track happened. “After all the rona-dhona as Kumkum, it is so refreshing to do the funny scenes that I am getting to do”, says she.

Juhi who along with VIP won Comedy Circus says that it was just a co-incidence that she got to tap her funny bones in both Kumkum as well as Comedy Circus at the same time. “The success of Comedy Circus means a lot to me. We went up the ladder in a ‘slow and steady’ manner and our final performance was our best”, avers Juhi.

Lastly, when asked about her next move, the actress concludes saying, “I have my plate full as of now!!”. 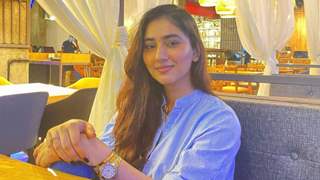 plssss give ur best one

14 years ago thanks... best of luck to her! I know she always does her best at whatever she does!

14 years ago thank you for this great article on a great actress! juhi is undoubtedly the BEST on tv today. she's talented and versatile as we know only too well. not only is she a fab actress, she also sings so sweetly. and who can forget her memorable win in comedy circus? she definitely has a flair for comedy and is just so cute, bubbly and adorable in kumkum.

wishing her all the best in saas vs bahu! she has been simply marvellous this whole week in all her performances. and her performance with hussain was out of this world! hot and sensuous. they are just magical together! made for each other!!

her bonding with both hussain and reetaji was very cute to see. she was also really sweet to praticheeji who plays her mum in kumkum. obviously she shares great rapport with her co-stars.

there's always so much of warmth and fun when juhi is around. that's what i have always noticed.

good luck to you always, juhi. you're the best and we love you!

14 years ago thanks for the article juhi is looking superb

14 years ago juhi is the best. all the best to juhi for saasvbahus

14 years ago juhi rocks
she is multitelented, whatever she do, she always give her best
i hope she wins svb

She is The Best !!!
Very Muliti Talented
From singing competition to dance competition.
Then even showed her jalwa in Comedy Circus.
Finally got to see her in a unique and a different show saas vs. bahu!
She is just amazing!!!!
and her character of Kumkum is the most precious thing ever!!!

God Bless Juhi!!! and Hussain
Both make a wonderful Jodi!