With toddlers making their way into the lives of the five celebrity couples in NDTV Imagine's Pati Patni aur Woh, the problems of the couples were sure to increase manifold. 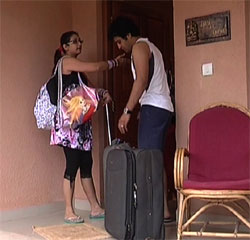 Featured Video
However, nobody could ever predict that Juhi Parmar and Sachin Shroff, one of the couples would stage a walk out from the show. So what forced them to take such a decision?

According to our source, "When the toddlers were to be sent, a letter was sent to every home that stated that the couples receiving twins will have an added bonus, and that the man of the house need not go out for work, and could work from home. When Juhi and Sachin were given twins, Sachin was duly asked to cook for the other celebrity couples staying at home. All was fine till here, but when he was asked to drop the lunch boxes to every house, the couple could not digest it. Without any qualms, Sachin however managed to cook on the first day, and even dropped the boxes to all. But, on the second day, he was asked to cook chicken (which he is not used to), and to top it all, he was asked to sit with the other couples and have his lunch".

And at the same time, when Sachin was out, the unit organized a play home for kids at Juhi's place. "The best part was that the other couples were asked to drop their kids at Juhi's place and go away. So this meant Juhi had to take care of not only her twins, but also four other kids. This enraged Juhi and also Sachin so much, that they decided to put their foot down, and argued that the unit is playing an unfair game on them. All this ended in Juhi and Sachin packing their bags and walking out of the show", informs our source.

However, it is heard that the unit members had a three hour long discussion with Juhi and Sachin and promised them that such a thing will not happen again, and got them back to the show..

Well, with all well at Juhi and Sachin's home, they are back to parenting their twins, who are all set to tear them apart with their naughty behavior...

+ 2
13 years ago Ju-Sa did a right thing by walking out. its a reality show, but things cant be enfoced for a chosen lot

+ 3
13 years ago I support Juhi and Sachin. Parenting is not an act scripted and watched. It is done when the real occasion occurs. It is a natural act, not an artificial one. Why not Prannoy Roy and Barkha do that if Juhi and Sachin really leave? It is unfair for the little kids who are confused. And why almost all the real young parents are obese? Even perfect brides' parents are obese in a startling way.

+ 2
13 years ago The channel is just cashing in on SaJu's popularity to gain more TRPs...and the fact that they just show the negative aspects is so not right, they should be showing both sides...SaJu were totally right in whatever they did....

paheli90 13 years ago She is such an idiot.....itni saal agaye lekin vusko patha bhi nahin ki bacho ke samne kaise baath karna chahiye......
Even if they thought it was an unfair task ..... they should have discussed the same matter with the directors and not shout like no.1 jungli on the show.....
You should have seen shilpa's smile when she received the letter, vuski smile was very evident of this comming....LOL
Even if some ppl think task is unfair ... there is a way to talk out of things ....
She has a basic problem...she always finds excuses to not do things, she is least bothered about sachin...doesn't even bother i sachin ate or not but she keeps eating....
She 's unfit and incapable of doing anything other than so called "acting" where she has to shed some fake tears.

Adhiangel 13 years ago She shouldnt have talked like that.

kareena. 13 years ago at one point they are ordered tyo cook chiken
and on other hand the parents of baby are not allowing th cook chicken in a home

+ 5
13 years ago juhi shud have politely handles the situation as sachin did it...she shudnt have spoken infront of kids like tat!

13 years ago hey m with Juhi and Sachin... i mean ds didnt happen with Shilpa and apu who were also given the twins !! i suppoort Sachin and Juhi!!!