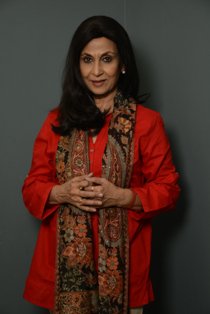 Joyshree Arora will soon be seen in Zee TV's Sapne Suhane Ladakpan Ke. She is known for her roles in Bollywood movies like 'Chak De! India'. The show will mark Joyshree's TV debut. Having associated with the industry over the years, Joyshree's acting skills will surely impress the audience.

She will be playing the role of Piyush Sachdev's grandmother and her character will be of a hoity toity' lady, who has travelled the world and is a big mouth. She is filled with energy and has shifted to Banaras to spend time with her grandson. She keeps on telling people that she is here only to die peacefully while she wants her grandson to live in this city till the end of time.

Her modern avatar will surely impress the audience and she will be shown as a neighbor of Garg parivaar.

7 years ago She also acted in another doordarshan serial 'Lekhu' apart from 'Hum log'. I have watched both the shows during their original runs.

7 years ago BTW, She was the lead of the first Indian TV soap 'HumLog' that was on Doordarshan.
This is not her first TV serial, may be first small role .
She is a superb actress!

chaitrasarvani 7 years ago she is gud...sslk can attract viewers wth her to some time...but aftr tht surely they hve to bring vihaan n rachna 2gthr finally...to make justice to thr lve...kabeer cnt be accpted fr rachna even though he is handsome.

7 years ago this is not her debut, she acted in Hum log in 80s, plus she acted in Zee's one more show which used to telecast in late 90s or early 2000.

7 years ago Will be looking forward to her role...SSLK rocks with high TRP's

+ 3
7 years ago poor actress, does not know that she has done wrong choice. sslk does not deserve her