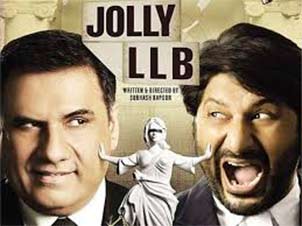 Boman Irani, who played a corrupt lawyer in "JOLLY L.L.B.", is overjoyed at the film being named the Best Hindi Film at the 61st National Film Awards.

Boman believes that the film spoke about change and that's what made it successful.

"'JOLLY L.L.B.', just like 'Bhoothnath Returns,' speaks of what the people want to hear. It's about hope, about the system and whether there can be some kind of change in the country," the 54-year-old said here Wednesday at the success party of "Bhoothnath Returns".

"'JOLLY L.L.B.' was that kind of film and thankfully, it has won the best Hindi film National award, I am really overjoyed," he added.

Directed by Shubhash Kapoor, "JOLLY L.L.B." starred Arshad Warsi in the lead role and spoke about corruption in the legal system.

Boman believes that just like "JOLLY L.L.B.", his latest film "Bhoothnath Returns" is all about good intention cinema and there is a huge scope for such films.

"I think there is hope for good intention cinema in the country," Boman said.

He hoped that "Bhoothnath Returns" gets a National award next year.

Aditya Chopra Pens a Heartfelt Note on '50 years of Yash Raj ...
30 minutes ago