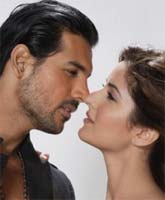 It is known from the sources that Yash Raj Films is planning to show the first look trailer of 'New York' with the SRK biggie, Rab Ne Bana Di Jodi.


'New York' is a story about three friends who are living in peace and harmony but known to them lurks a danger that will threaten the very essence of their friendship.


Sounds interesting! Lets wait and watch whether it interests us so much later too!