Mumbai, Sep 23 (IANS) Abhishek Bachchan and John Abraham, who were seen together in 'Dostana', are being considered for Meghna Gulzar's next 'Milte Hain'. 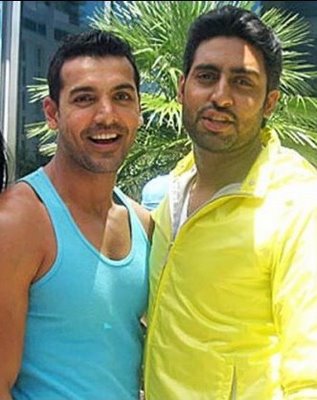 While the director is keen on Abhishek, producer Sanjay Gupta had been in touch with John for the film.

Sources says Abhishek is being made an offer he can't resist - he has been asked by two of his most favourite girl pals - Vidya Balan, who is playing the female lead in 'Milte Hain' and Meghna - to play the male lead.

'Abhishek's mother Jayaji and Meghna's father Gulzar saab go back a long way. Jayaji calls Gulzar saab her 'bhai'. Abhishek treats Meghna like a sister. There's no way he can say no to her. On top of this, there's Vidya who has repeatedly expressed a desire to work with Abhishek after 'Paa'. It's unlikely that Abhishek can say no to two such persuasive ladies,' said a source.

There is a new twist in the tale, though. Gupta has met John for the same part. And let's not forget, John is an old buddy of Vidya too from the time they did 'Salaam-e-Ishq' together.

Is Gupta more keen on Abhishek than John for the part?

'Yes, I've met John for a part. Beyond that I am not revealing anything. Abhishek too is very dear to me. I leave the decision on whom to sign to Meghna.'