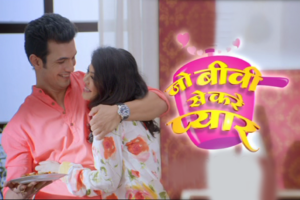 Jo Biwi Se Kare Pyaar...
Mon - Fri at 7:30 pm on SAB TV.
Cast - Arjun Bijlani, Shweta Gulati, Rakesh Paul, Gungun Uprari, Amit Behl
Producer - Deepti Bhatnagar Productions
Story so far -
The show is supposed to be a light hearted cookery show with a little bit of fiction too involved. Each episode presents a new story and the main characters involved are a newly married working couple played by Aditya (Arjun Bijlani) and Suhani (Shveta Gulati). Mohit (Rakesh Paul) plays Aditya's elder brother and his wife is Naina (Gungun Uprari) who help the couple tide through their daily life. Suhani's boss is played by Amit Behl.
Till now we saw stories weaved into the narrative which show how the couple tackle their day to day issues and end up cooking food together in their spic and span kitchen which is how the cookery show format comes in. Almost in every episode the couple has visitors over for lunch or dinner due to which they have to cook food so we have seen the entries of the mother-in-law, mamaji, chachaji and even the boss and clients coming home for a meal. 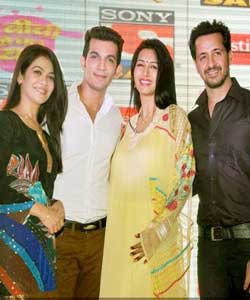 What works -
Obviously the recipes! The producer Deepti Bhatnagar, an excellent cook herself in real life herself takes an active interest in finalizing the recipes and demonstrating it to the cast which is why they are genuine. She is also responsible for the set which looks picture perfect. The casting is perfect and to give credit to Arjun Bijlani who looks deft while cooking and knows what he is doing. He is one metrosexual man who every woman will want as a husband for - he is the eternal romantic who loves to cook too.
What doesn't work -
The entire setting looks unrealistic, right from the story to the kitchen and the house. It is too plastic, white and bright! Each episode follows a same pattern with the couple getting up in the morning, planning to go for a meal out which gets cancelled due to some or the other visitor for whom they have to cook a meal. Almost in every episode they also have a mis-understanding with some or the visitor who enters their house unannounced and it looks repetitive.
Both of them are hardly seen working and the husband is forever making excuses with his boss about skipping office to take care of the kitchen at home. There is no explanation as to why Suhani's boss who treats her like his own daughter hates Aditya. The dishes that are shown being cooked look very simple and easy to make which is okay for a cookery show but looks way to easy when weaved into fiction. 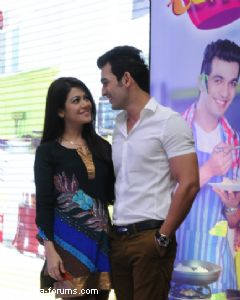 The neat and clean house especially the kitchen is odd when we think of the practicalities. Also we can see in some shots that the kitchen is an open kitchen which can be seen from the living area too but then there are some stories which demand that the rest don't know who is cooking in the kitchen!
The show is presented by Prestige and very conveniently the elder brother is shown to be a Prestige dealer. The brand is very prominent everywhere. All the utensils and appliances are of the same brand which is displayed well and each time a new dish has to be made they look all new and shiny. There are so many appliances in their kitchen - where do they store them, what about cleaning, drying and maintaining these things?
The demonstration of the recipes look simple but nowhere is the preparation of the ingredients shown anywhere and all are kept ready for use. The couple despite shown as a new age busy couple have all the time to maintain a well-stocked kitchen and they never fall short of having unusual ingredients like zucchini, fresh cottage cheese, olives, fresh oregano, fresh thyme, red raddish, etc., available in their kitchen.
Our take -
How many times will the couple entertain their various chacha and mamas who like many of the SAB characters come across as loud and over act too! There is no dearth of recipes but what about that many visitors visiting the couple's house?
All said and done, it could have done well by just being a good cookery show instead of adding drama and comedy in it!
Seema Khot Mattoo

+ 4
7 years ago i disagree with this review. so many shows dont follow logic at all then why blame this awesome show? It os so light and cute!

7 years ago After reading you review i felt like laughing and it raised up my temper too :P
So this show is unrealistic? i have no idea what u expected..the concept of the show is like that only i i feel it has done full justice with the concept...its a cookery show...and whats rong with the kitchen being white and bright...everyone wants a beautiful kitchen right? and abt brand may be they r brand conscious ?? morever its the thing called advertisement..:P
and if it was just a cookery show how would it be a fresh and new concept..i dont think without adding drama and comedy it would be a nice cooking show...it would be just an ordinary cooking show...enjoy the show...the review can't be digested :) sorry :)

Bestestarj 7 years ago Stupid review. All the shows in tv are unrealistic. This show, at least, makes us smile.

+ 4
7 years ago i am extremly glad tht viewers who are not even active on JBSK forum are cuming here and giving there views tht are all in favor of JBSk... tht just simply defines everything ..kudoos to the team

gilly12 7 years ago This type of worthless review should not be published in the site like India-forums. The site loses its importance. The show is very unique and much more realistic than the high emotional melodramatic family soaps or so-called reality shows. Excellent idea and superb presentation. I really like JBSKP very much.

+ 2
7 years ago It's a good show...I don't agree with the review except for that repetitive part.

+ 4
7 years ago i don't find the show unrealistic...its a nice show which never fails to bring a smile on face . Its cute , sweet cookery show . Wr learn recipees with a pinch of comedy and romance...and that's perfect...

+ 4
7 years ago Jo biwi rocks.. and it will always be the most amzing and out of the box concept

7 years ago this is the most illogical review ever I have read... pathtic...
Next season master chief.Shud tell u.cleaning of spoons n plates... n how salt n pepper r get..[ROFL]
If u have seen the show tu u would have known... thyme olives b etc all were ordered frm the shop wch adi revived...
Unrealistic review...

7 years ago Non of the show currently running on any channel is realistic.SO i don't find anything unrealistic. Actually i like the fact that cooking is not dragged and guests are coming in each episode.