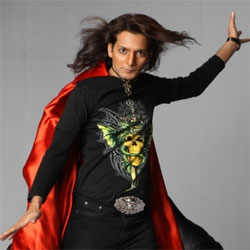 The male contestants surely did perform better than the fairer sex this week in Sony's Jhalak Dikhhla Jaa. After Bhagyashree's exit last week, this week's Elimination Special on Saturday sees yet another shocker of a result as the very adorable magician Ugesh Sarcar gets unlucky this time.

According to our source, "Ugesh and Anand Raj Anand were in the bottom two and had to go thro' the Face-Off where they perform on their previous act again. While Anand Raj came up with a steady performance, Ugesh who performed marvelously well in the episode, forgot his steps and the entire act got bit weird. This made the judges' decision easier, as the choreographer duo Saroj Khan and Vaibhavi voted for Anand Raj Anand. When it was Juhi's turn, she was heard saying that it was fair enough that Anand Raj Anand stays in the race, now that Ugesh forgot his steps in the face-off".

The very talented magician will surely be missed on the Jhalak stage...

From next week onwards, the journey gets tougher in the Jhalak House as the contestants get to perform on various International dance forms. Unlike the last two weeks, both the male and female contestants will be seen grooving next Friday.

shwetalibane 13 years ago I think Anand raj shud have gone!!
Ugesh was better than him!!

seema_d 13 years ago I m so going to miss Ugesh and his wonderful dance and magic..... please bring him back... Come on guys, lets get together and demand for his return!!!!

seema_d 13 years ago Ugesh was the only one who ever showed dance and magic together... it was so nice to see magic incorporated in his dance act.

+ 2
13 years ago i just want dat Baichung or ARA to go out.really felt bad wen Ugesh got voted out.seriously he is damn gudd

13 years ago thank god karan is safe well thanks for the news...

+ 3
13 years ago poor ugesh! its sad though at the end of the episode he says ram and karan gud luk and that broke my heart! he is rlly sweet!i rlly wish he stayed for a while atleast!

13 years ago Poor Ugesh...felt really bad and sad for him..he was just so sweet enuf to apologize Tina in front of so many ppl and moreover that too on an international TV show which has billions and billions of viewers and fans and voters,too..

But I am more than happy that Karan got d maximum votes and d highest score too..!!