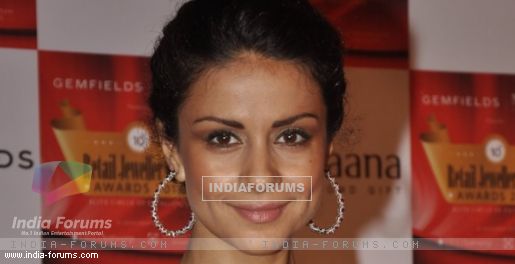 Jewellery should not dominate the persona of a human being, but should rather play a "complementary" role in life, according to actress Gul Panag.

"Jewellery should play a complementary role in one's life rather than the dominating one," the 36-year-old actress, who was here on Wednesday to promote jewellery brand Zoya and its series 'The Spirit of the Zoya Woman', told IANS.

"It should complement the person you are. If I see the jewellery of a person before him then that jewellery is not doing anything great for that person.

"It's great for Zoya that people might see the jewellery first, but if I had to give a gift to somebody, I would pick something that would complement the person you are, that doesn't take anything away from you but adds to you," she said.

Gul, who donned a casual look for the event with less gems on her body apart from string earrings, earlier went on an adventurous off-road trip with her friend and women rights lawyer Swaty Malik.

Their trip is currently being aired as a documentary titled "Off Road with Gul Panag" on Discovery Channel.

Sharing her experience on the trip, Gul said: "Travelling and exploring has become a part of my life. Travel helps us absorb the act of living. If you are a working woman, you have so much to do that you don't have a minute for yourself.

"It doesn't mean you are being reckless, it just means you are taking calculated risks and let things run their course. I have always lived my life on my own terms, a lot of people have always asked me, why don't you do things like xyz? But I want to do what suits me best."

Crafted with intricacies, Zoya products are made from well researched designing techniques adapted from places like Spain, Greece and India's Varanasi.

"Jewellery is all about detailing, intricacy and craft. We travelled to many places to know different crafts of jewellery. In Zoya, we don't look out for any stereotypical style. We like to be experimental," Sangeeta Dewan, who designs jewellery for Zoya, told IANS.

"When we were conceptualising for Zoya, we actually were thinking who will buy our product. We already have a big giant like Tanishq. But Zoya products are exclusive, premium and for a very discerning person," she added.

The price range for Zoya products stars at Rs.1 lakh.

Erica Fernandes: I am not a birthday resolution person but hope to ...