The versatile actress Jaya Bhattacharya who was last seen in Ekta's Mahaabhaarat on 9X will be seen playing the role of Devika in Sony's Specials @ 10, in Madhur Bhandarkar's series on Heroine. 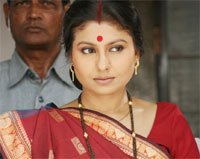 According to our source, "She will be playing the role of Devika Shakawat, one of the powerful women in state politics, but a complete doormat when it comes to her husband and son at home. Her husband Rajnath Shakhawat has been a veteran in politics. Recently he has been booked in couple of criminal cases and has chosen his meek docile housewife Devika to contest elections to make sure that nothing goes wrong for his hands-down win. But suddenly news pours in that a girl has been gang raped in their very own constituency and the culprit is their only son Ranvir Shekhawat. Rajnath leaves no stone unturned to cover up the deeds of her son. Devika becomes the centre of the heat... where by she is made to blatantly lie against her own will".

musicheals 8 years ago Aw Love her! :) Her personality is amazing!

canideactivate 11 years ago Thanks, I miss her in Banoo Main Teri Dulhann as Bua Ji.