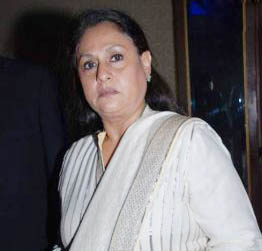 There has been much speculation about Jaya Bachchan's debut show on Sony TV. It was reported that the show which will be named Vasundhara is based on the Gujrati novel Yog - Viyog wherein Jaya Bachchan would play the main protagonist. Right from the time it was announced we also got to know about the various tentative dates for the launch of the show.

However, while Jaya Bachchan's hubby Amitabh Bachchan's show on the same channel has been progressing well with the shoot too happening, if sources are to be believed Jaya's show seems to be facing difficulties as of now. "Jaya Bachchan's show created quite a buzz but has failed to take off. While there has been news that names like Anupam Kher, Vinod Khanna, Varun Badola, Vishal Singhh, Urvashi Dholakia, Aasiya Kazi etc., have been approached to play various important characters in the show along with Jaya Bachchan none of these actors have been confirmed as yet. The casting has been an issue because they are looking at big names but then there are either monetary problems or date issues. The launch date too has been in much discussion and while earlier it was said that the show would launch in the end of 2013 it was later pushed to mid-2014 and then it was preponed to Feb 2014. However, February has started but there is no further announcement of the same. Not much has been happening on the show and thus it seems that it has been kept on hold" informs a reliable source.

The spokesperson for the channel however maintained that the show is very much happening but was not sure when! "All I can say now is that it is work in progress so the question of putting it on hold doesn't come up at all. It might happen soon enough - maybe before IPL (Indian Premier League) or after IPL. However, I cannot comment on the casting or the launch date since nothing has been decided as of now," she concludes.

We tried calling up couple of actors to know the exact status. While Urvashi Dholakia and Vishal Singhh's phone was unavailable, Aasiya Kazi confirmed that she was indeed approached, "Yes, I was approached to do a role in the show but things have not been finalized yet so I cannot talk about it at present." We also got to talk to Varun Badola who sounded surprised that we even knew that such a show existed! "When is it happening? As of now, I don't know anything about the show. Yes, I was approached for it and I liked the story too. I was confirmed and they told me that the show would go on air in December last year but I have not heard about it from anyone ever since. They were totally secretive about the show so I don't even know my character details." says Varun.

The actor now is wondering as to how much time he should be waiting for the show to happen, "I have been waiting but ultimately I have to run a house you know!" So even as he goes on to play for the cricket team Mumbai Heroes in the Cricket Celebrity League, Varun is also busy shooting for a pilot episode of a new show, "Yes, I am shooting for a pilot episode. However, I cannot tell you what show it is and which channel it is for," he concludes.

Well at this point of time all we can wish for is a great and early start to the show!

7 years ago I am just waiting to see Varun back on screen and it does not matter for me what show.
So he is shooting for a pilot episode of an unnamed show.

+ 2
7 years ago I hope to c varun badola back On screen it doesnt matter which show but still...COME BACK SOON

7 years ago Ok varun come soon
I want to see you as lover, u r fantastic actor very talented, god bless you

+ 2
7 years ago hope to c varun badola on the show very soon,... no matter which show is that but i wish to c him back on screen!!