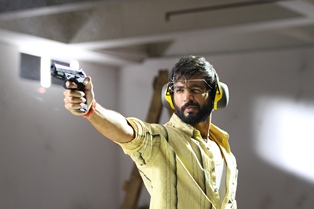 For the movie Jai has undergone a complete look transformation! The movie portrays Jay's character GYANI' as a strong & macho male. With an overgrown beard and strong muscular frame, Jai looks nothing less than a bold and handsome, rugged male ready to take on challenges that come his way!

Jay's look in the movie is a huge transformation from his cute chocolate boy looks! Jay's new look has certainly been complimented by the judges and contestants of the current season of Dance India Dance L'il Masters as well. But will his fans like this new look?? We say why not!?!

'Desi Kattey' is an action-drama film which revolves around two children who work in a pistol factory and turn out to be sharp shooters. The film features talented actors such as Suniel Shetty, Jay Bhanushali, Akhil Kapur, Sasha Agha, Twinkle Bajpai and Ashutosh Rana among others. Action hero Suniel Shetty plays a coach in the film while music of the film has been composed by the legendary - Kailash Kher. Desi Kattey will be released on 28th August 2014.

Bigg Boss 14: Abhinav Shukla and Rubina Dilaik to be a part ...
-3 seconds ago