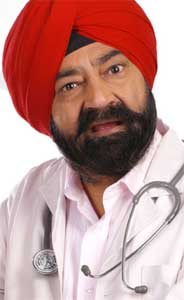 With racial attacks on Indian students in Australia turning ugly, a take on the issue by popular social satirist Jaspal Bhatti is a much-desired antidote to soothe hard feelings.

Bhatti's film school 'Mad Arts' has come up with a non-commercial eight-minute film, 'Sydney Chala Sydney' to highlight the dilemma of families whose children are either already studying in Australia or are planning to go there.

'This film highlights the problems faced by Indian students studying abroad and also showcases various quandaries in the minds of parents and students who are going abroad,' said Bhatti.

'I hope that our film, which is full of comedy and hilarious moments, would certainly attract the interest of larger audience. Comedy is one of an effective medium to touch upon very serious and relevant social issue,' he added.

The movie will be circulated on the internet and shown on various channels in the coming days.

The lead character of the movie Sydney is going abroad for higher studies when suddenly his family gets the news of racial attacks on Indian students in Australia.

They cancel his trip. However, when someone reminds them about the huge amount already spent on making preparations for the journey, they decide to send Sydney to Australia.

'We are not against our children going abroad for studies. But we want to educate students as well as their parents about the training and preparations they need to make in advance,' said Savita Bhatti, chief executive officer of Mad Arts.