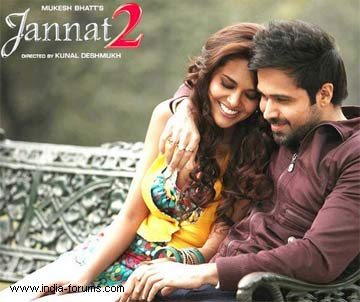 'Jannat 2' director Kunal Deshmukh has played it smart. While shooting the 'A' certificate film, he was already prepared for necessary alterations that would be required for it to be showcased on the small screen.

Otherwise, he says he wouldn't want to see his film being murdered with several cuts by the censors.

'We do know there are some guidelines. Whether good or bad, we have to follow them. While shooting ('Jannat 2'), we did take alternate takes for certain scenes like lovemaking and liplocks which I knew might get cut. I had to reshoot the song so that you can still follow the story,' Deshmukh told IANS.

'What you will see of 'Jannat 2' on TV will be almost uncut, but a different cut. I would not want my movies to be murdered with 59 cuts. I don't want to be in the same situation as 'The Dirty Picture',' he added.

Ekta Kapoor's bold film 'The Dirty Picture', which was set for its worldwide TV premiere Sunday afternoon, was submitted with 59 cuts. Despite that, it wasn't allowed to be shown in any time slot before 11 p.m.

Deshmukh was prepared for any such situation, and shot alternative scenes to showcase the movie on TV.

'We were prepared for it and I dubbed my film for satellite. We took alternative dubs for language, which I knew will not be allowed on TV,' he said.

'Jannat 2' features Emraan Hashmi, Esha Gupta and Randeep Hooda. It is slated for release May 4.