View Profile
Following in the footsteps of his previous film The Dirty Picture, star Emraan Hashmi's sequel of Jannat, Jannat 2, 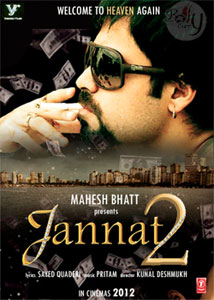 has been officially banned by the Censor Board of Film Certification (CBFC) for going on air during a prime-time slot on television, which make this movie the second in its league.
Despite pursuing a U/A certificate for its television premier and filmmakers agreeing to make cuts where appropriate, the CBFC notified ardently to the makers of Jannat 2 that the film will only be suitable after 11pm.
The Bhatts have been agitated beyond means and have openly refused to accept the decision taken by the Censor Board. They have argued the given condition by responding that if they have consented to the various cuts that concern the CBFC, then the movie has earned its right to be screened at prime-time.
A counter reply was provided by the Censor Board that the film was indeed an unsuitable source of entertainment for the young audience.
Should the makers of Jannat 2 fail to comply with the Censor Board's necessary demands, their film will be destined to face the same fate as The Dirty Picture which hasn't premiered on television as of yet. If such issues continue, the industry will inherit a terrible loss as satellite rights serve as a big revenue source for filmmakers.
The Dirty Picture and Jannat 2 aside, we wonder whether Hashmi is on his way to scoring a hat-trick with the Censor Board! Jokes apart, we hope to see both movies premier on television very soon. Meanwhile, let us know what you think, should Jannat 2 premiere on our tellies?

Rakul Preet Singh confesses to being a part of drug chats ...
29 minutes ago