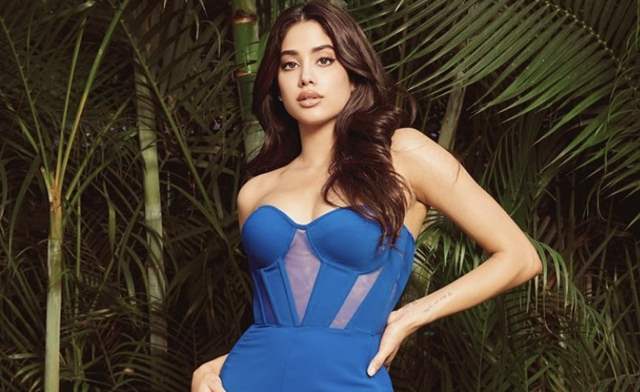 Janhvi Kapoor is going all out for the promotion of her upcoming film Good Luck Jerry and throughout this promotional spree of hers, the actress has made a point to up her fashion game a notch higher each passing day.

Janhvi has been setting major style goals in the past few days and the fashion police is eyeing it all. Recently, Janhvi took to her social media handle and shared a bunch of pictures of her latest look which is alluring.

In the pictures Kapoor is seen decked in a corset ink-blue jumpsuit. Near the midsection, the off-shoulder jumpsuit had translucent accents. It had a wide-leg style from the bottom end. Janhvi perfectly accessorised her attire for the day with diamond stud earrings and tinted sunglasses that gave off retro feelings.

Fans and followers flooded the comments section with hearts and fire emojis and lauded her styling.

Since the past few days Janhvi has been juggling between promoting her film and filming for Bawaal alongside Varun Dhawan. The duo was filming in Poland and have been documenting their journey with a plethora of BTS pictures and videos.

Talking about Janhvi's film Good Luck Jerry, is a black comedy crime film helmed by and produced by Subaskaran Allirajah, Aanand L. Rai and Mahaveer Jain.  It is a remake of the Tamil film Kolamaavu Kokila . The film is slated to premiere on 29 July 2022 on Disney+ Hotstar.

+ 8
4 months ago good luck jahnvi, you're chosen some interesting films so far