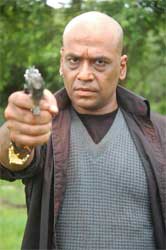 Mohan Kapoor who played the lovable host of Saap Seedhi is back in a new avatar in Colors' Laagi Tujhse Lagan that will be instrumental in bringing together Nakusha (Mahhi Vij) and Dutta (Mishal Raheja).

The actor plays the vivacious bad guy who lives life in a jungle. He encounters Naku and Dutta when they get trapped there.

A little birdie tell us, "Mohan Kapoor essays the role of Jagtap. He is an alter ego of Dutta and he is not sacred of him at all. Initially he put Dutta into lot of problem, but the moment he gets  to know that Dutta and Naku are made for each he makes all big efforts to unite them. Jagtap will be shown living the life in jungle which is completely devoid of civilization. A back story will be revealed as to why he lives in the jungle, and this will actually be a link to his past memory."

The production house had brought in Mohan Kapoor to play a small cameo of only 3 episodes, but the latest is that he will be around till Dutta realizes the  importance of love and get closer to Naku.

When contacted Mohan Kapoor told us, "This is a fantastic role which revolves around the central character. I didn't want to take up any role that borders only on the periphery. Jagtap is eccentric but not evil. He lives in the jungle, away from all kind of civilization where there is no food, no people around and no comfort. However it is a mystery as to why he is leading such a life. When Dutta and Naku stumble upon him in jungle he will play an integral part in taking their relationship forward. However it is to be seen whether their relationship changes for the better or not."

We hear that Mohan Kapoor's character will be extended to nearly a week.

LadyMacbeth 9 years ago Mishal, . U r sooo handsome , manly , macho yet so sweet , so beautiful, so attractive in every respect . Your smile is so fascinating , your wink is fetching , fatal is your looks n our heart is at the gun point of your manly charm n enchanting physique. If hotness is a crime , then u r definitely a sinner. What huge amount of intensity your eyes have ! They r killers. Really you define beauty at it's purest form. U deserve love , adoration , adulation n our heart's true awe for your hard work n dedication. But we r all crazy for you , aren't we ?
Mahi, u r very very pretty too.

Jyoe 10 years ago The only reason fr me to watch LTL is u mishal n maahi!! u guys are awesome!

Jyoe 10 years ago Great role as Jagtap in LTL..Thanks to you Mishal aka Dutta realised his love for Nakku...The turning point of the show was coz of u! Nice work!

ltl_fan 10 years ago Jagtaap Dada you have left an everlasting impression on Dutta.
You have become immortal. Thanks

Hessa85 10 years ago any chance of jagpat return please, man blew us away!

.Ashleydevlin. 10 years ago I loved ur character n i will always remember it.

You have shown today that love is everything...Wo zindagi hi kya hai jo pyaar ke bina jeete....
Love came into your life in the form of Paakhi...even after she left, you loved her....and then came dutta and nakku...and you gave your life as a sacrifice for their love....

Salute you dada.... You have changed dutta forever....

Salute you and your love....You shall always remain in our hearts.....

Sara Ali Khan heads to Mumbai as she receives summon from ...
45 minutes ago

Bigg Boss 14: First look of the shopping mall, theatre and ...
54 minutes ago