Mumbai, Aug 24 (IANS) Actress Shilpa Shetty says she couldn't recognise her former 'Celebrity Big Brother' housemate Jade Goody when she saw her at the second season of 'Bigg Boss' - 'she had changed so much'.

Jade scorched headlines for making racial comments against Shilpa in Britain's reality show 'Celebrity Big Brother' in 2007. She came to India to participate in the second season of Indian version of 'Bigg Boss' last week, but left after she was detected with cancer.

'I was shocked and confused. I was filled with so many emotions. No matter what happened at 'Big Brother', I had spent considerable time with her in the house,' Shilpa, who is hosting 'Bigg Boss 2', told IANS. 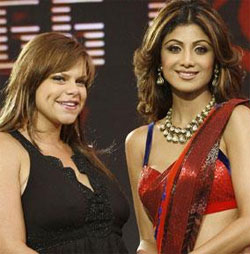 'I felt really bad for her. Now I know why I couldn't recognise her when I met her. Life has put her through so much, she had changed,' added Shilpa.

She got Jade's phone number and spoke to her at the airport just before the stunned Big Boss housemate left for London.

It was an incredibly emotional experience for Shilpa, free of rancour.

'Speaking to her was not easy. It was very tough. There was never any rancour,' said Shilpa.

'Yes, I was hurt when in the 'Big Brother' house she made some comments about our country. But even in the house we had made peace after the initial rancour. Once I was out of the house, the media went to town and she got the brunt of it.'

Shilpa tried all the time to pacify the world press. 'Believe me, it was really sad when Jade was slammed. I never wanted to become a champion of the third-world at her cost.'

Interestingly, the channel Colors had asked Shilpa before inviting Jade Goody to be a contestant on Big Boss.

'My only precondition was that Jade should be treated well at Big Boss. I knew how it felt when to go into a foreign country and be in a hostile situation (Big Brother).

'To my delight, the Big Boss contestants were very nice to Jade. I felt so proud to see how she was treated. It just reiterated the fact we Indians are very forgiving and welcoming,' she said.

Shilpa is shocked by the cynicism of those who think this to be a TRP gambit.

'Jade's illness is not gimmick. She must've done pap-smear (cancer screening method) before coming to India. How would she know the tests would be so damning?'

Now Shilpa plans to meet Jade. 'I only had a chance to speak to her before she left. I will meet her when I go to London for the Unforgettables tour with the Bachchans next week.'