Jade Goody, the celebrity from UK's reality show Big Brother, made an entry into the Bigg Boss house as one of the 14 participants on August 17th 2008, as 'Bigg Boss Season 2' premiered on COLORS. 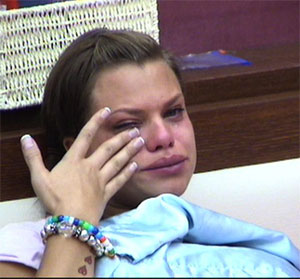 Featured Video
However, her stay at the Bigg Boss house has been cut-short with an unfortunate development. Only yesterday, the results of Jade's test were out (conducted in UK before her departure to India), and the tests indicate the possibility of cancer. Jade had just stayed in the Bigg Boss house for 2 days and was looking forward to reaching out to millions of Indians through Bigg Boss Season2, to try and dispel various perceptions that exist in people's mind about her.

According to Deepak Dhar, Country Head, Endemol India, "We are shocked to hear this unfortunate news.  Jade has been very brave in the face of such a difficult situation and we are extending all possible support that she requires at this stage. Our prayers are with her."

Commenting on the development, Rajesh Kamat, Chief Executive Officer – COLORS, said, "It is indeed an unfortunate development and we extend full support to Jade in this hour of testing times. Jade is a strong-willed woman who's emerged victorious from many a battles. We sincerely hope that she wins this time as well."

Shilpa Shetty, the host of Bigg Boss Season2, said, "It is unbelievable, how life is so unpredictable and finds a way to distract and derail you from your plans. My prayers are with Jade, her family in this hour, when they face one of the biggest tests of their life, in times ahead. I pray she comes out of this, soon and, stronger. Hope that she is going back with happy memories from this country."

The first episode of Bigg Boss 2 showed Jade making successful attempts to interact and make friends with all the Bigg Boss housemates and show the real her to the world. Being a bubbly individual, she was accepted by the housemates and gelled well with them.

13 years ago My prayers are with Jade and her family

13 years ago so sad..i wish her all the best and my wishes are always with her and hope she will be fine

+ 6
13 years ago Wish her all the best, and my prayers are defintely with her!!

13 years ago Very bad indeed...... my wishes are with her always

13 years ago Aww. She was trying to prove herself. I hope she gets well soon.

13 years ago This is very sad.I hope everythng will be fine

13 years ago i pray tht god showers his blessings on u n ur family. get well soon jade