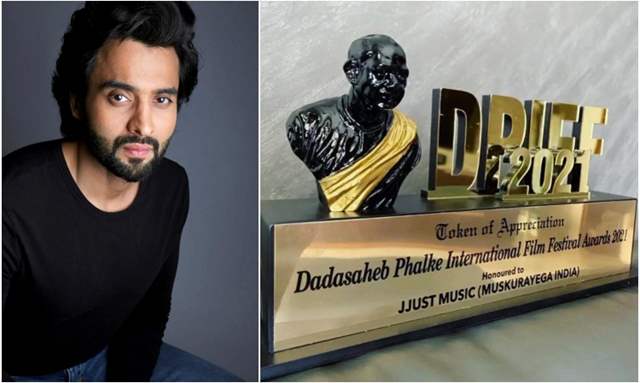 Jackky Bhagnani received Dadasaheb Phalke Award for his song of hope to the nation— Muskurayega India. The award ceremony was hosted on Saturday and streamed live on Zee5...

Jackky Bhagnani is the youngest producer of the nation and he has again, made us proud by winning yet another prestigious award recently. He received the country’s one of the highest awards in entertainment - the Dadasaheb Phalke Award for his song of hope to the nation— Muskurayega India.

When the whole country was under lockdown, Jackky's JJust Music released the track that brought hope and smiles during the trying times. ‘Muskurayega India’ received enormous appreciation from across the country for the manner in which many of India’s favorite actors self- shot their portions following all norms of social distancing to help create what emerged as an anthem of hope and inspiration for the people of a nation during the pandemic. Such was its impact that even our Hon’ble Prime Minister Narendra Modi also appreciated the initiative for uplifting the spirit of the nation and shared it by re-tweeting it.

Stars like Tiger Shroff, Ananya Panday, Shikhar Dhawan, and Jackky himself were a part of the video among many others. The song brought the nation together in testing times and is rightfully getting an award it more than deserved.

Curated by Jjust Music and composed and sung by the talented Vishal Mishra, ‘Muskurayega India’ became a symbol of India’s spirit of solidarity, battling against the pandemic. The song has meaningful lyrics penned by Kaushal Kishore. The anthem was presented by Cape of Good Films and Jackky Bhagnani's Jjust Music.

Jackky is not new to such success as lately the actor had been in the news for headlining a great set of upcoming projects. Jackky has Bell Bottom and Ganapath next in his lineup. Shooting for Bell Bottom happened in between the pandemic and this is no mean feat as he was first person nationally and internationally to start and end a film in between the pandemic, just goes on to show the dedication for his craft.