View Profile
Mr and Mrs Bachchan aka Abhishek and Aishwarya Rai. Everyone knows how happily married they are but have you ever wonder how Bollywood's most talked about couple actually met? Well, Abhishek has finally spoken out about their oh-so-secretive meeting and greeting phase and BollyCurry has the scoop right here! 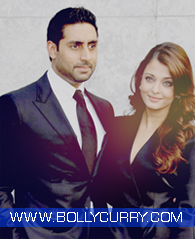 Abhi recently revealed in the latest Vogue issue (where Aish dominates the cover in a black, feathered look) that before being pronounced as man and wife, Ash and Abhi were complete strangers. It wasn't until they started working on the same projects that each became acquainted with one another and slowly went on to becoming great friends. Abhi believes that the moment he saw Aishwarya, he knew she was special for him. If that's the case, one wonders what they were doing with other partners in the interim?!
Abhishek went further on to state that he had first met Aish in August of 1997. He happened to be with Papa Bachchan for his film Mrityudata (1997), which was being shot in the beautiful alps of Switzerland, where simultaneously Aish was also present shooting for her film Aur Pyar Ho Gaya with Bobby Deol.
Abhi suprisingly revealed that whenever they both came together, something just clicked and they knew that what they shared with each other was something really special. Abhishek couldn't help but also add that every moment spent with his darling wife has been nothing less of perfect. He definitely knew she was the one because she made him feel complete whenever they were together.
Aww! This surely is a rare case of a match made in heaven!