COLORS' show Jaane Kya Baat Hui, produced by Cinevistaas, which focused on the story of a diligent and loving housewife, whose life gets shattered when she gets to know of her husband's adultery in marriage will soon be going off air. The show boasted of some big names, Shweta Tiwari, Sanjeet Bedi, Suhasini Mulay, Abhinav Shukla, Ami Trivedi. 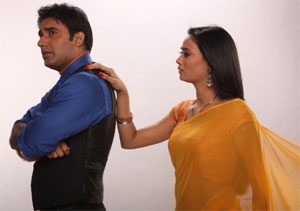 Featured Video
However, the strong subject failed to generate the required response from audience and lagged behind in the TRP charts, which had earlier forced the channel to shift the show from the prime time slot of 10 PM to an early evening slot of 6.30 PM.

"The TRPs were improving after the show was shifted to the early evening slot. But now, the channel has decided to end the show. Jaane Kya will be ending on June 5th", confirms our source.

We talked to the lead of the show Sanjeet Bedi who seemed surprised to hear the news. "Actually, we are delivering better numbers now, and we have a nice story line going.. I have not heard about the show going off air; but if the news is true, then I would take it as the channel's prerogative and move on".

We tried contacting Producer Siddharth Malhotra, but since he is out of the country he asked us to talk to the Creative Director of the show, Sharad Raj.

Our source though is certain that the show will shut shop on June 5th. Our efforts to get a confirmation from the channel were in vain.

Well, in the midst of stiff competition to gain numbers, yet another show bites the dust..

13 years ago i like this show i n think its getting better.. just abit to draggy at the moment with the Shailendras affair.. they shud concerntrate on aradhana and Shantanu now!!
plss dun stop the show!