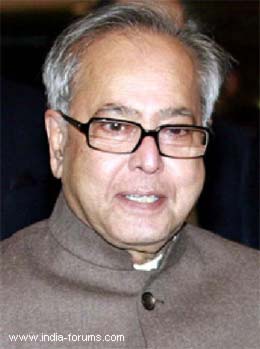 New Delhi, Oct 18 Bollywood is one of India's strongest soft powers, but Finance Minister Pranab Mukherjee says he rarely gets a chance to watch a film. No wonder the last movie he saw was 'Rang De Basanti', before its release, in 2006.

'I used to see some movies earlier. But recently I didn't have the luxury of having any time...except for one movie, watching which was I think, a part of my job. It was on air force...,' Mukherjee said at the NDTV Indian of the Year awards ceremony here Tuesday.

When anchor Barkha Dutt, who was on the stage with him, prodded him saying it might have been the recent Shahid Kapoor-starrer 'Mausam', Mukherjee left the audience in splits when he said: 'No, no, no...I think it was 'Rang De Basanti'

He says he watched the movie, because he was asked to do so by the then censor board chief. A portion of the Rakeysh Omprakash Mehra film, which featured Aamir Khan, Kunal Kapoor, R.Madhavan, Sharman Joshi, Siddharth and Soha Ali Khan, depicted the crash of a MiG-21 fighter aircraft.

'A point was raised whether it should be cleared by the censors. Perhaps Sharmila (Tagore) was the chairperson of the censor board. She asked me to see the film. So I carried my whole battalion, air force chief, naval chief, army chief...and I told them you see the film, and I forced them to watch the whole length of the film. Thereafter when they said its okay, I informed the chairperson that we have no problems.'