Mumbai, March 17 (IANS) Newcomer Ranbir Kapoor of 'Saawariya' fame is seeing Deepika Padukone and is 'happy to be part of her life.'

Ranbir, son of Rishi Kapoor and Neetu Singh, said: 'We have been dating for the past couple of weeks. 'She has simple needs, she is caring. And she respects her family. I really like that,' the Kapoor scion said.

He takes pride in the fact that she is an independent career woman at 22.

'She has achieved so much in so little time. I am so happy to be part of her life,' he says. However, marriage is not on their minds at the moment.

The duo came close to each other while shooting in Australia for a month for 'Bachna Ae Haseenon'. They later shot a Pepsi ad together in Mumbai.

Excerpts from an interview with IANS:

Q: Are you seeing Deepika Padukone?
A: Yes, I am.

Q: How long have you been seeing her?
A: We've been dating for the last couple of weeks.

Q: Weren't you linked with her earlier also?
A: I was. But at that time we were just friendly. We weren't seeing each other.

Q: Is this serious?
A: Do I look like a frivolous person to you? But, before you ask, we aren't getting married right away. Let's see where it goes and neither are we going to sign films just to be together. She has her career to focus on. I have mine. Coincidentally, we started our careers on the same Friday. We have our priorities in place.

Q: Tell me about Deepika?
A: Beyond all the grace and dignity she projects, Deepika is very simple and shy. She has simple needs. She is caring and she respects her family. I really like that. She's an independent career woman at just 22 and she has achieved so much in so little time. I'm extremely proud of her achievements and I'm so happy to be a part of her life.

Q: When did you get close to her?
A: While we were shooting in Australia for a month for 'Bachna Ae Haseenon'. That's when we really got to know each other and then we shot a Pepsi ad together when we returned to Mumbai.

Q: Are you able to treat her professionally in front of the camera?
A: I know when to switch on and off. When Deepika and I are working together, I focus on my character. The chemistry is better when you like your co-star. When you don't like your co-star, it just shows.

Q: Have you met her parents?
A: Oh yes! They're extremely nice and caring people.

Q: Has she met your parents?
A: Oh, yes. I confide everything in my mother. So there was no way I could be in a serious relationship without my parents knowing.

Q: You've been shooting almost non-stop for your 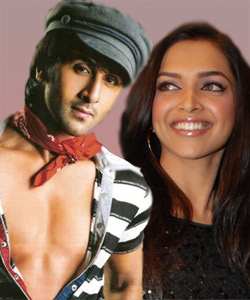 second film. How different is the banner Yashraj from Sanjay Bhansali's?
A: My second director, Siddharth Anand, is a childhood friend. So it's been a great experience. The script of 'Bachna Ae Haseenon' was so strong that I had full confidence in both the director and his vision. It's shaped up really well. As for Mr Sanjay Leela Bhansali, I couldn't even begin to compare the 'Saawariya' experience with 'Bachna Ae Haseenon'. My second film is very different from the first. 'Saawariya' was a once-in-a-lifetime role that fortunately or unfortunately came at the very start of my career.

Q: So would you say there's no other peak to scale after 'Saawariya'?
A: Mr Bhansali is the biggest and greatest. His genius is incomparable. However, that doesn't mean there aren't other talented filmmakers. I want to work in different genres with various filmmakers. I'm so glad to be a part of Siddharth's vision.

Q: You played a football benefit match in Pune earlier this week and scored four goals and were declared 'Man Of The Match'?
A: I've always been passionate about football, though I haven't played much football since school. I went for this match because it was for a good cause. Salman Khan was also associated with it. I just got lucky about the goals, I guess. Our captain was Sohail Khan.

Q: Wow!
A: I feel every person should be passionate about some sport or the other. It teaches you the importance of team spirit and winning.

Q: You play a 'Casanova' in a Yashraj film?
A: It's 'Bachna Ae Haseenon'. I wouldn't say that. It's the journey of this man and the different relationships in various phases of my life.

Q: Why was Katrina Kaif's role knocked off?
A: It was getting too long. We had lots of discussions. And it was in the best interest of the film.

Q: But why poor Katrina?
A: Nothing personal. It wasn't only because we hadn't shot her episode as yet.

Q: Apparently, you get to kiss all your heroines in 'Bachna Ae Haseenon'?
A: That's absolutely incorrect.

Q: And now you're doing another film with Katrina?
A: Yes. And I had no hand in it. She was already part of Raj Kumar Santoshi's film when it came to me. It was a lovely romantic comedy. I haven't started pre-production work on it. But I'm looking forward to working with Mr Santoshi, who is one of my favourite directors. He's definitely one of the master storytellers of our times. He has worked with my father in 'Damini'. And now it's my turn.

Q: Have you been offered Aamir Khan's 'Delhi Belly'?
A: Yes, I have been. I'm honoured that someone of Aamir Khan's calibre wants me to work in his film. We're working on the dates. I'd love to be a part of it.

Q: There were rumours that you are in Mani Ratnam's film?
A: I am, actually, but not in the Abhishek-Aishwarya one. He has contacted me for a film that he wants to do next year. I really want to work with him. I also want to work with Imtiaz Ali, Aditya Chopra, Farhan Akhtar...oh, so many directors. I'm like a kid at a toy store.

Q: You've started looking different?
A: Have I? I think it's important for every actor to feel like the character he's playing. Earlier, when I was doing 'Saawariya', I felt boyish like the character. Right now, I've to portray a character going through various phases in life. So, yes, it is a conscious effort to work on my looks. Getting that right is 20 percent of the performance. The look helps the audience connect to the character.

Q: You've been linked to a gallery of gorgeous women in the last two years? 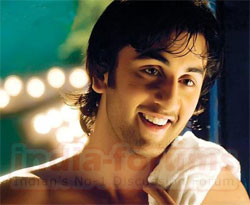 A: I think it's very unfair to the women who are linked so carelessly to me. I can imagine how embarrassing it is for the girl and her family. It is not correct. I guess getting linked to Sonam Kapoor was inevitable. Every time, two newcomers do a film together, they're supposed to be involved. We've been friends since childhood and she is an amazing girl. Anyone would want her as a girlfriend, but we aren't seeing each other.

Q: Did you have more say in 'Bachna Ae Haseenon' than 'Saawariya'?
A: Not at all! Mr Bhansali and I shared a very special and productive relationship. On the sets, both Sonam and I were given the freedom to express our opinion. Since 'Saawariya' was my first film, I needed a helping hand and Mr Bhansali was like a parent. Now in 'Bachna Ae Haseenon', I feel I'm on my own. The strength has to come from within me. I've to be much more focused on getting it right.

Q: How are you choosing your roles?
A: I haven't really made a chart for how I want to go about my career by instinct. I'm looking for good scripts and meeting interesting directors. Fortunately, people seem to have liked me in my first film and they've shown keen interest in casting me. I'm reading a lot of scripts and this is a great time to come to the industry. There're so many new ideas, scripts and directors...I'm happy that I'm here.

Q: Your dad has had a kind of retro-revival recently?
A: Yes, isn't that amazing? I'm extremely proud of my father. He is my favourite actor and someone I look up to. All I want to do is to make him and mom happy.

Q: Finally, how does life look to you?
A: I'm extremely happy about the appreciation I got for my first film. My parents are very proud of me, and that makes me happy. And I'm very happy about my relationship with Deepika. I'm in a very happy place and I want to be this way all the time.