Fasten your seat belts, as NDTV Imagine's Basera, produced By Sagar Arts takes you on a musical and fun-filled ride of Salsa and Waltz!! 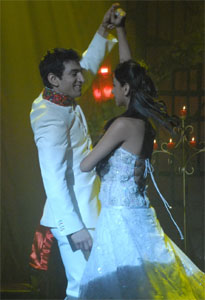 Featured Video
The sets were fabulous, the ambiance was awesome, and there they were, the famous trio of Amit Jain who plays Shantanu Mehrotra, Priya Bhatija aka Nandini Parikh and Susanna ( Nandini's sister, Ujji) performing on the Salsa and Waltz. Choreographing them and monitoring their steps was Tina Sachdev, from Jhalak Dikhhla Jaa fame.

According to our source, "Amit Jain performed the Salsa with Susanna while he had a very close and intimate dance with Priya Bhatija on the Waltz format. The steps for the latter were breath taking, very romantic and close held too. The actors did not get any time to rehearse for the dance sequences. They hardly managed to get one and hour hours of rehearsals, but the entire sequence came out very well".

"Susanna and Priya had great costumes for the occasion and looked gorgeous. In fact, Susanna was such a sport that she ignored her new shoe bites on her legs which started to bleed, and continued with her shoot. The actors were at ease and performed to the 'T'", adds our source.

The high light of the entire dance sequence was the sweet little kiss that Shantanu aka Amit Jain gives on Nandini aka Priya's neck, which gave a new meaning to their silent love story portrayed so far in the show. For the uninitiated, Shantanu and Nandini have literally fallen for each other at the very first sight, and this Waltz act will only take their love story to another level.

Says Amit Jain, "I was very nervous with people around, and many channels covering the shoot of the dance sequence. I have got married four times on screen before, but kissing a girl before so many, was a first experience for me. But thank God, all went well as Priya and I have become very good buddies (smiles)".

Priya Bhatija who was looking simply beautiful in the white colored tube gown with back lift states, "It was a very nice experience altogether. The ambience of the entire place was fabulous, and the dance sequences came out very well".

As per our source, "A Dandiya sequence will be shown this week in Basera which will be followed by this Salsa and Waltz act the coming week".

Tune in to Basera, Monday to Friday at 9.30 PM only on NDTV Imagine..

blackcoffee100 13 years ago would like to read more on amit.cute,isn't he?