You have seen celebrities sing, dance, crib, gossip and even perform some deadly stunts on your television screen. If you think you've seen it all, think again… because you ain't seen anything yet!!

Sony Entertainment Television brings a reality show like none other for the first time ever on Indian television. 'Iss Jungle Se Mujhe Bachao, is an adaptation of ITV Global Entertainment's format show I'm A Celebrity… Get Me Out Of Here! The show brings together 10 celebrities to face the ultimate challenge – swapping a life of luxury to survive in the Malaysian rain forests, in a bid to be crowned King or Queen of the Jungle. 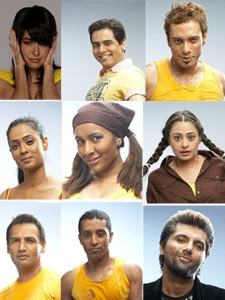 It's a deep-dense forest and our daring contestants will have to fend for themselves… survive on meagre ration, perform dangerous tasks, live with the creepy crawlies, encounter the wild … all this under 24/7 scrutiny of the cameras. To make things a little more challenging, everyday, Monday to Thursday, one celebrity will have to take the dreaded Jungle Challenge, which involves overcoming a fear and collecting "Stars". The number of stars collected determines how much food the camp gets for the night. Apart from the Jungle Challenge, there is Celebrity Chest which they must find. The winner of this gets the Jannat. You will see these celebs live through hunger pangs, loneliness and boredom. Their struggle for survival, the grueling jungle and the fear of elimination will bring out never- seen- before personality traits in each one of the ten celebrity contestants.

On Monday, the phone lines open for viewers at home to call in or sms their votes in favor of their favorite celebrity, to keep them on the show. The phone lines will stay open until Thursday 12.00 pm. On Friday, the hosts will reveal the results of the voting, and the two celebrities with the least votes will have to go through the Maha Jungle Challenge to find a place in the camp.

According to Gurdip Bhangoo, Programming Head of Sony Entertainment Television, "As part of our re –launch, we made a commitment to our viewers to be uniquely different and introduce content that is refreshing and never seen before on television. Iss Jungle Se Mujhe Bachao is a unique format where for the first time you see celebrities swap their luxurious life to survive in a jungle. The series has been well received by audiences internationally and we are sure that the innovative concept will entertain and keep the viewers on the edge of their seats wondering what next?"

ITV's I'm A Celebrity…Get Me Out Of Here! has been the number one rating format in the UK, USA, Germany and Hungary, and its Indian version Iss Jungle Se Mujhe Bachao is co-produced by ITV/Silverback and Miditech.

13 years ago palak was this year roadies contestent...she was like hell...her words...u can't even imagine...she is a shame to all girls...
anaida is a singer....

+ 3
13 years ago sadly i'm not interested in these celebrities so probably won't watch it, Sony should have gotten better people...

+ 4
13 years ago i am waiting eagerly for this reality show! nice change.

+ 5
13 years ago Wow Shweta, Chetan and Akashdeep will be there! I will def watch this show!

13 years ago OMG! Even the title song is the total copy of I'm a Celebrity Get Me Out Of Here. They should have just done ONE thing Original !