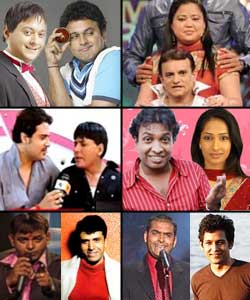 The hunt for the pairs is on at the moment. Though the final names have not been finalized, few jodis have been short listed.

According to our source, "The show will see some new names getting introduced into the show, while few will be faces already associated with the show. Bharti Singh – Paresh Ganatra, Krushna Abhishek – Sudesh Lahiri, Swapnil Joshi – Ali Asgar are the names that are confirmed. In addition to this, lot many celebrities are being approached. Abhishek Rawat, Shekar of Zee TV's Agle Janam Mohe Bitiya Hi Kijo has been short listed, and if all goes well, will be seen paired up with Kapil Sharma. Priya Marathe of Zee TV's Pavitra Rishta fame has almost been confirmed, and she will be seen along with Sunil Pal. Sooraj Thapar who is presently seen in Star Plus' Sasural Genda Phool has been short listed, and might be seen with VIP. Natasha Sharma of Na Aana Is Desh Laado on COLORS has also been approached, but things are not finalized with her. In total, the show is expected to have seven teams".

When contacted, Priya Marathe said, "I am short listed, but will have to wait for a confirmation".

Abhishek Rawat too accepted that he has been approached, and is waiting for a final confirmation.

Sooraj Thapar on his part said, "Yes, I am short listed for the new season of Comedy Circus. But I have not got any confirmation as of now".

punjabi#1 10 years ago thats not sudesh lahiri, the babbu maan a punjabi singer. please learn the differences between the punjabi singers and comedians.

LimitLessFan 10 years ago kindly get ride of Rashmi,Saloni they are boring and so is rajeev

Vaibhav.sharma 10 years ago cool..it will be fun to watch this show, but it would have been even more fun if all the Jodis in the show were new...new talents must be on the majority part of the show

Gur.N.cool 10 years ago please get rid of the old contestants first

regalla 10 years ago again...it will be one sided with Krishna and Sudesh getting all the applauses and marks....we seriously need a break...it is getting monotonous......

burgerchaap 10 years ago cmon, when will they stop this comedy era :|

Shaina_b 10 years ago Krushna and Sudesh again??They will again be praised in every episode!!!!