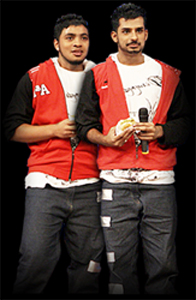 Dance India Dance Doubles on Zee TV will yet again see a talented Jodi from Rajeev ke Rockers going out this week.

After the shocking elimination of Ponnambalam and Maulica from Rajeev ke Rockers last week, it is the turn of the rapper Jodi, Max and Manik to bow out.

Our source states, "Dillin aka Max and Manik who specialized in Hip Hop had a very bad day and were in the bottom with Hardik and Nidhi. The Best Performance of the day came from Amit and Falon from Marzi ke Mastane, and they performed with a prop of as many as 18 chairs. Saurabh and Vivek from Geeta ki Gang also impressed one and all with their Robot Lavni act".

"Max and Manik had a certain dialogue in their entry segment which was rejected by the channel at the last minute. The team felt that the dialogue was not fit enough to be aired on National television. So the duo had to put in a filler of a musical piece for their entry which apparently did not gel well with their performance. There was no connection seen in the performance and music and this was one of the reasons for their ouster", adds our source.

With Rajeev ke Rockers going two down, we wonder what's coming next in DID Doubles..

10 years ago They think some obsene(too intimate) dances and vulgar costumes are appropriate for National TV. Not defending their decision but if there is such thing, than it should be followed completely.

10 years ago WHAT they were the best! I feel so bad for Rajeev... Some of Geetas Gang should get out

+ 2
10 years ago they are good...sad for Rajeev losing another contestant

+ 2
10 years ago What? This is a big turn off .. they edit a major part of the performance (could've just beeped out the words and whoever could understand it would, in this case adults) Max and Manik are amazing performers, they've got to be back on wild card. Feeling bad for Rajeev, although his choreography hasn;t been up to the mark except for the premiere episode which was excellent

+ 2
10 years ago they were amazing,,,just want them to be back in wild card,,,i am happy for amit and falom,,eager to see them perform

+ 5
10 years ago They were Awesome =( really gooood dancers

lalilolu 11 years ago vidya looked like pregnant! i thing that Genelia, priyanka, and katriina looked good. But i guess sonam just dont know how to wear clothes i mean yeah white color is nice but the style of the dress or what evr that was it was just soo normal. ykh! i diidnt like it. (its ma opinion:)