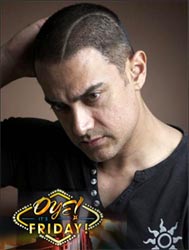 This weekend Oye.. It's Friday on NDTV Imagine saw one of the heart throbs of Bollywood, Hrithik Roshan chatting, dancing and giggling with the host Farhan Akhtar. Well, the next guest on the show is Aamir Khan, the Gajni actor who has been in headlines for many reasons.

“The shoot for the second episode is already over. Aamir and Farhan had a gala time together. Aamir was little conscious while speaking in front of camera, but he liked the concept and was enjoying it,” says the source from production house.

The shoot with Shah Rukh Khan and Karan Johar is done. “Those two episodes are complete, but when it will be aired is yet to be decided,” adds the source.

One of the blue eye singers of Rahman will be performing on the stage of Live Tonight. “Benny Dayal is the singer who will be singing live. He has sung songs like Pappu Cant Dance Sala from the film Jaane Tu Ya Jaane Naa and the music was composed by A R Rahman", concludes the khabroo.

Let’s see what this Gajini star has to reveal on this chat show coming Friday.

13 years ago the first epi was cool with hrithik...i liked it, they were trying to be more spontaneous...it would be fun to watch aamir though...tfs

+ 7
13 years ago Aamir and Farhan on the screen at the same time!!! I''m definitely gonna be drooling while watching that one. ;-)

+ 2
13 years ago AWESOMEE
will defo watch it for Aamir.

mohdmanzoor 13 years ago crap show i saw the first episode yesterday. there is no proper speaking no uniformity and nothing. farhan looks so nervous and hrithik wht he speaks he himself doesnt know. u need uniformity for such chat shows. there is lot of scope for improvement. best of luck to Aamir

13 years ago this show rocks!! I enjoyed the 1st epi with farhan n Hrithik!!!