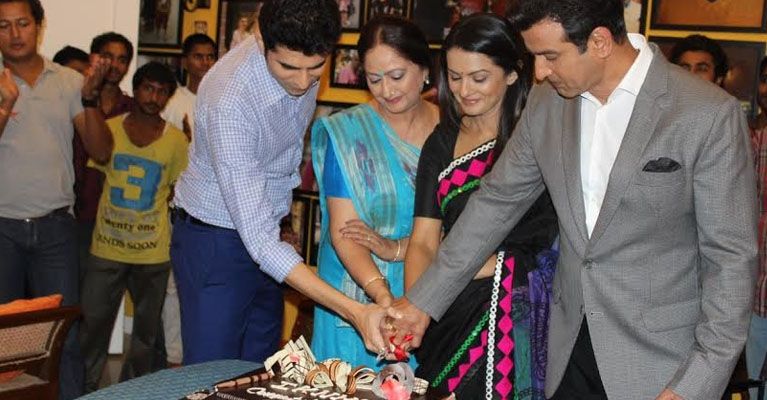 It was celebration time on the sets of Sony Entertainment Television's Itna Karo Na Mujhe Pyar as the show completed a successful run of 150 episodes. Bringing in the celebrations, the lead actors Ronit Roy (Neil), Pallavi Kulkarni (Raghini) and Darshan Pandya (Aman) cut a cake with the entire cast and crew of the show. Ronit personally made sure that everyone present on set had a piece of cake.
"All of us are really happy with the response we have received for the show. It's surely a time to celebrate our efforts and hardwork. I would also like to thank all our viewers on behalf of the entire team for their support. Without the love of the audience this wouldn't have been possible. We promise to entertain them and also hope we complete 1500 episodes soon" said Ronit Roy.
Pallavi Kulkarni added, "Honestly the journey has been so beautiful that we didn't even realise when we completed 150 episodes. I would like to thank all our fans for showering us with so much love. The show has a lot of interesting twists and turns in store for the viewers and I am sure they will enjoy the upcoming track immensely."
As the celebrations continued, Ronit Roy was seen in a fun mode as he pulled everyone's leg on set especially his on screen nemesis Darshan Pandya aka Aman. While there is a lot of tension between the two characters in the show, off screen the two get along like a house on fire.

Congratulation to whole team of iknmp for completing 150 episodes.

5 years ago Congratulation to whole team of iknmp for completing 150 episodes. love you PALLAVI KULKARNI.

+ 2
5 years ago Ronit roy is reason i watch this show
Ps. Pls comment 2 time guys it helps the rank to go up :)

+ 2
5 years ago All the best to the Team. May the Show regain better days and viewership.

8 years ago Mahesh Bhatt can only cast his SON in his movies...can never cast his daughter in any of HIS OWN films...can cast only females like Sunny L, Mallika Sehrawat and all...dislike!