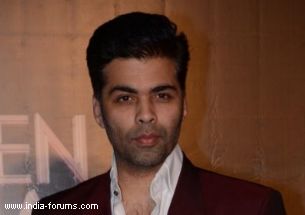 Filmmaker Karan Johar, who will be seen acting in his first full-fledged role in "Bombay Velvet", says it was great to work under Anurag Kashyap's direction in the film.

The shooting of the movie is almost over with just a day's shoot left.

"It was great to be directed by Anurag. Most of my scenes are with Ranbir (Kapoor). So, officially he is my favourite co-star and my favourite director is Anurag Kashyap. I don't have any other choice actually," the 41-year-old said here Wednesday at a party thrown by the producers to announce the release date of the film.

Kashyap said that "Bombay Velvet" has hints of a love story.

"It is just a love story and the rest we will tell you soon. The first look will release in October," Kashyap said.

"Bombay Velvet" also stars Anushka Sharma and is scheduled for a Nov 28 release this year.