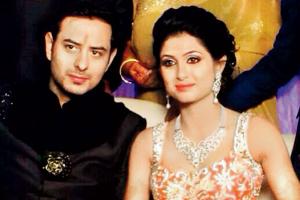 While Shefali Sharma is all set to be seen on screen in Rashmi Sharmaâ€™s Aap Toh Aise Na The on Sony TV, is in news these days. Yes, the pretty looking actress who essayed the girl next door as Bani in Colorsâ€™ Bani Ishq Da Kalma has recently tied the knot.

Shefali who fell in love with showâ€™s creative supervisor Varun Sethi took the nuptial vows with him on September 3. Shefali opens up about her marriage with TellyBuzz and shares her experience related to her marriage functions, honeymoon plans and much moreâ€¦

How and when did it happen? Shefali says, â€œIt will sound funny but during my shoot days of Bani I used to call him my bhaiyya. Everyone including my Chachi used to tell me to stop calling him bhaiyya as it did not suit his personality. We became good friends on the set and one fine day Varun asked me to come out of the house, he was sitting in his car, his head was injured badly and had stitches on his head. I was thinking why he is calling me in such state to meet."

"I was surprised after I met him as it was an unexpected marriage proposal which I received from him. Before this we were not even dating so it totally surprised me and also the fact that he had a meeting with my family members regarding our marriage," she continues.

Shefaliâ€™s marriage was a private affair and was disclosed after the wedding actually took place. When quizzed the actress regarding the same she says, "We wanted to keep our marriage a low-key affair but for all my close friends and relatives we organized a reception in the city and invited them to celebrate the occasion."

Talking about her marriage rituals Shefali avers, "My marriage rituals started three days prior to my marriage that is from August 31. On the very first day my Mehendi ceremony celebration began along with Sangeet too then on the next day it was followed by a cocktail party along with an interesting tradition known as "Jaago".

Elaborating more on the tradition, she says, â€œI really enjoyed this Jaago tradition.  We had to ask people to stay awake and this is done with a matka and diya in it which I am supposed to take along with me to everyone's house and ask them to fill it with oil. This ritual is celebrated with Dhol all over the street."

On September 2, Shefali and Varun exchanged rings as they celebrate their ring ceremony. Telling us more about the same Shefali says, â€œWe had our ring ceremony where my entire family member surprised me with a dance performance and finally the day September 3 arrived when I got ready as a bride. Later a reception was organized for my friends in Mumbai."

"Thankfully my shoot for my new show Aap Toh Aise Na The has got delayed and I have got a monthâ€™s time so we will mostly fly to Europe for our honeymoon," she concludes talking about her honeymoon plans.

We wish Shefali and Varun a happy married life!

nikki.171 6 years ago They make a cute couple. All the best to Shefali and Varun. :)

deejagi 6 years ago All the best Shefali, Wish you a very happy married life.

anjumluvkinny 6 years ago Wishing u a very Happy Marriage Life ahead Shefali n Varun.
Hope your show start very soon dying to see you with Kinshuk

cooks09 8 years ago Very nice idea!!!! Great serial and wish they make it into movie