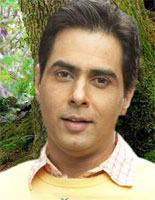 After the surprise elimination of Marc and the planned walkout by Kashmera Shah, we get to yet another Friday which will see one more contestant bowing out of Sony's Iss Jungle Se Mujhe Bachao.

According to our source, "Aman Verma who has been mastering the Maha Jungle tasks every time he reached the bottom two, could not succeed this time, and exits the show. Along with him was present Mona Vasu in the danger zone, but Mona got the better of Aman in the Maha Jungle Challenge".

"Mona has always been a tough competitor and has done some daring tasks before, and this result was fair enough", adds our source.

With the Grand Finale to be held on September 5th, wonder who the lucky three finalists will be, who fight it out in the Final task to be judged the 'King' or 'Queen' of the jungles…

As the battle gets intense, we can only play the waiting game…

sonumathur 13 years ago I think Mona is really a nice person.... very fair... very strong and focused.........she should win the show.

+ 3
13 years ago Except aakash and chetan,among the rest 3 membes whoeverr wins iam happy.but mona is strong.

13 years ago I really want Mona and Anaida to win because they did all the tasks with dedication and cooked for everyone in the Jungle. Chetan and Akash do not deserve to win because they do not have respect for women and Jay has started following their footsteps. I really wonder from which family background Akash comes?????

superstar95 13 years ago i really want mona to win she is awesum!!! i dont no y the guys thought that aman is bad.....

+ 8
13 years ago I wont mind if anaida or mona or chetan win. These three are only the deserving contestants left in the show !!!

+ 5
13 years ago @Aman12345: To all u blind Akash fans, its not only Anaida, Akash has constantly insulted all women in camp, Fiza, Shweta, even Mona! But u all think hes such a he-man hahaha. U all must be masculinists if we are feminists. Truth is Akash isnt a man at all....hes insecure and unsure of his manhood thats why he only targets women.

13 years ago I want a girl to win. The 3 boys who are left in the jungle are the most dumbest people I have ever seen -_-
And if Akash wins, i say congrats to you blind fans. Hope he respects you, especially his fangirls, just like he respects all the girls in the camp -_-

13 years ago akshh is worthless dog !!!!! dogs are much much better than him
anaida should win for standing up for a her self she rules!!!! sooo strong hope she wins !!!!!!!!!

+ 4
13 years ago this show is getting worse...how can they keep akash for sooo long..hope he wont win.