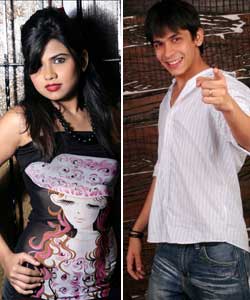 The rumour mills are churning the news involving Urvara Patil who was last seen on Star Plus' Maykee Se Bandi...Dor and upcoming star Karan Trivedi, actress Ami Trivedi's real brother. The two are apparently dating and have been spotted sharing some cozy moments often.

A little birdie from the industry quips, "Urvara Patil is in a relationship with Karan Trivedi and they will complete one year of togetherness in this coming December. Karan is an upcoming actor, a theatre artist and a sound actor. They both met through common friends at parties and gelled well since then."

Karan Trivedi who has bagged a new show for Star Plus remained unavailable while Urvara rubbished the buzz.

shashank.sriva 9 years ago @Angel - Check yer general knowledge!!!! No offence!!! :) Atleast Karan bro is pretty much famous for being Kituu fame Ami ji's younger bro and also for being the voice of Harry Potter (hindi version) in all the movies but first!!!